It has been a while. During the pandemic I have been blogging over at Suddenly at Home. This is Kinda Different’s first coffee-shop review since the beginning of coronavirus time — we just haven’t been frequenting them much for the last 18 months.

This coffee shop-cum-brewery in the Windom neighborhood of Minneapolis is friendly and inviting, unexpected in its industrial surroundings.

Windom borders Richfield, which is south of MN Rte. 62 (“the Crosstown”). Wild Grind is on the edge of the industrial area of Windom; a residential neighborhood borders it to the east and the bulk of Windom’s south Minneapolis single-family housing stock begins a couple of blocks north.

The coffee operation seems to be a recent addition to the main business, Wild Mind Artisan Ales, which opened in 2016. Wild Grind is open from 8:00 am till the afternoon, and Wild Mind takes over until late. The operations overlap a couple of hours Thursday through Sunday. 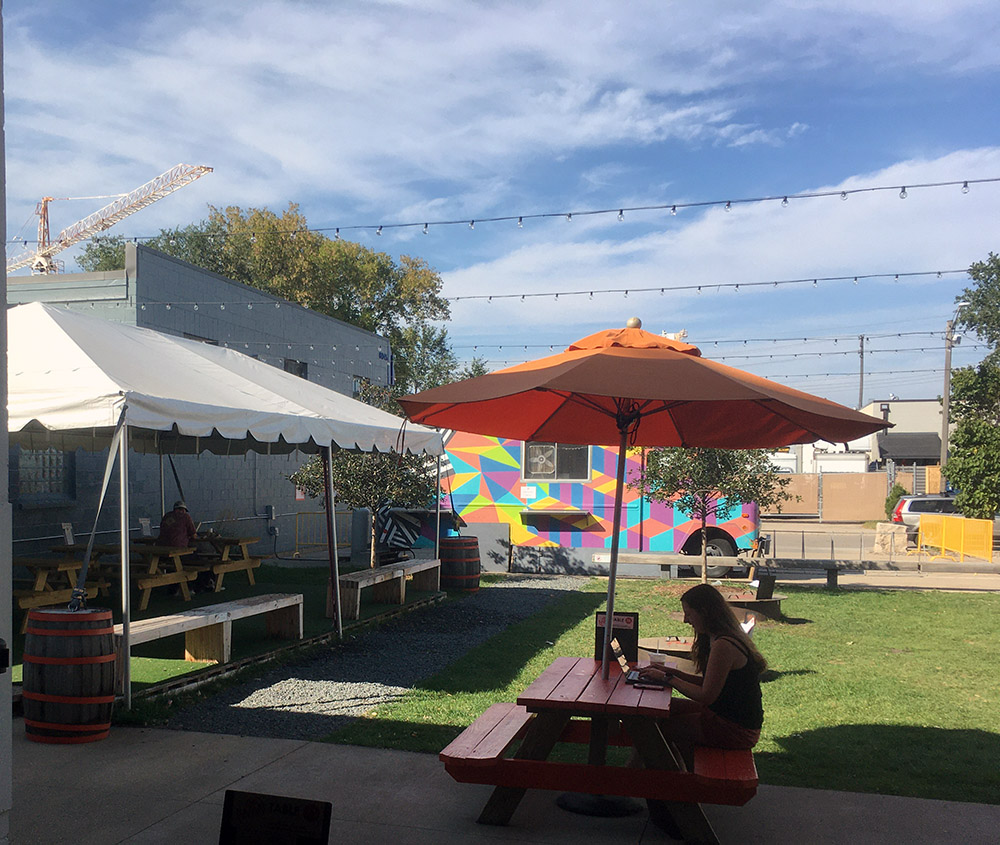 (The company calls its beer servers “beertenders.” Cute. No word on whether the espresso slingers are “beeristas.”)

The taproom is fronted by a beer garden with picnic tables, most outfitted with umbrellas. There is a seating area underneath tenting in case of really wild weather. The taproom has plenty of seating on picnic-style tables; there are bar stools at a very industrial looking tin table and stools fronting the beer taps. No soft seating is in evidence.

During our visit, on a warm September Sunday morning, the three large glassed rollup doors were open to the outside, and the space was full of light and air. Overhead fans kept the air in motion, easing any coronavirus worries that might arise. No one in the space was masked.

Crowd — Millennial and younger, with just two olds in attendance (that would be we). [ Can you hear Katharyn saying, “Hey speak for yourself buddy!”? ]

Wi-Fi — Wild Grind has an open Wi-Fi access point (no password), which delivers outstanding speed backed by US Internet fiber. (Because the Wi-Fi is open, it’s even more important than usual to use a VPN for privacy while on that network. We did.) Only around a dozen access points were visible in this not very densely populated industrial area, and only a handful of other patrons shared our Wi-Fi signal. Note: With my laptop’s aging battery, I have to be on the lookout for power outlets. I didn’t see a single one (but to be fair I didn’t ask the staff).

Staff — Young, friendly, and open; the barista was journeyman-level.

Beans — From Silverbird Roasting Co., whose principal used to be the roaster for Spyhouse. Two varieties were on sale, Colima and Super Nova, both priced at $18 for 12 oz. — pricier than the norm. 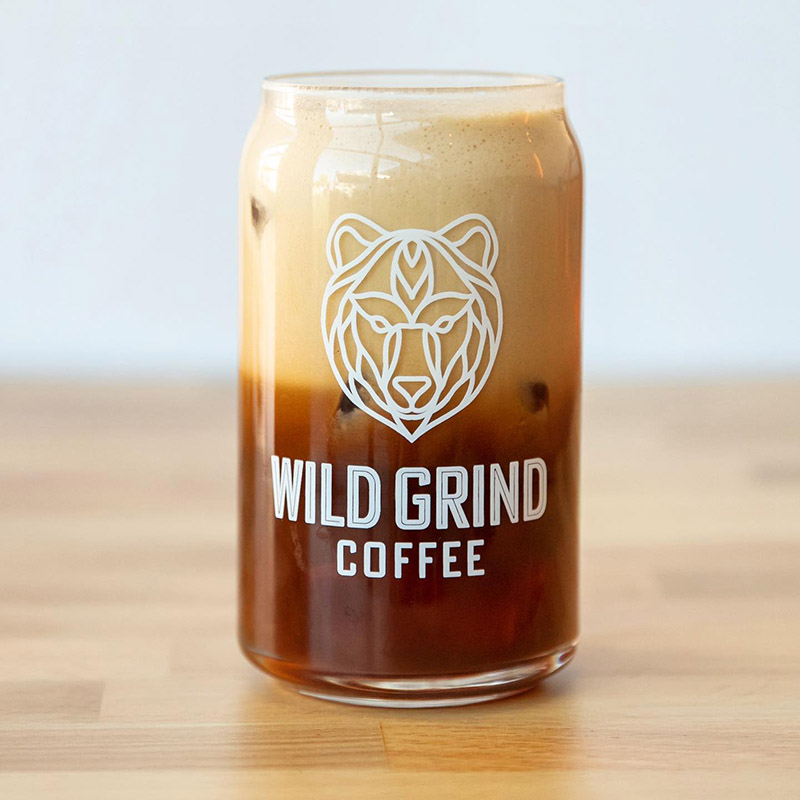 Cup — I had my usual latte with 2%. It came decorated with an artful florette. (I had to share this Hulk cartoon with the barista.) Katharyn ordered a MPLS Mule, which is a cold drink (pictured) featuring espresso, ginger beer, and lime.

Food — The pastries are sourced from Patisserie 46. Because we visited on a Sunday morning they may have been 24 hours old or more. My almond croissant was on the hard side. Katharyn had what was here called a “pull-apart.” It resembled a sweet version of what I have seen referred to as monkey bread. Katharyn declared it moist and enjoyed it.

Wild Grind sells pizza from Heggie’s; I assume it is baked in the back from frozen. A food truck is planted permanently on the premises (see the outside photo), but it is not operational yet pending the hiring of a head chef. The barista told me that they want someone who can broaden the food offerings.

Music & noise — The mix modulated over the hour and a half we were there, from mellow female vocalists (identity not captured) to 90s grunge towards the end. Some of what my SoundHound app identified: Polyethylene, pts. 1 & 2 by Radiohead, 1997; Drain You by Nirvana, 1991; Say Less by Nothing, 2020; and Fantasy by Mariah Carey, 1993. The volume level was set on the high side, echoing in the hard-surfaced space.

Pets — The shop’s website says that leashed dogs are welcome. We didn’t see any of those, but one patron brought his cat on a leash.

Bottom line — This is a friendly place, unexpected in its industrial neighborhood. The coffee drinks are inventive and always changing; the artisan ales look intriguing if you are into that sort of thing. I would definitely go back here, especially if in the area. The hard seating is not all that comfortable for long stretches on the laptop.