This does not happen in Massachusetts. There, cities and towns tile the counties and the state: they do not overlap. Minnesota is kinda different. In this state, eleven cities are completely enclosed within the limits of another city — nine in the Twin Cities Metro plus a “double doughnut” in the southeast.

The map below shows all eleven doughnut cities, and the next one zooms in on the nine pairs in the Metro. (Click on the maps to open a larger version in a new window.) The table that follows gives stats for the doughnut cities; click the column headers to re-sort the table.

I’m confident that I have found all the doughnut cities that exist in Minnesota. The confidence comes from ingesting Open Street Map data for 852 Minnesota cities and writing a computer program (in Python) to find the nested pairs in all that data. If there is interest from the technically curious I may post a followup on the Recovering Physicist blog, but the details of the process are too voluminous and obscure to go into here. 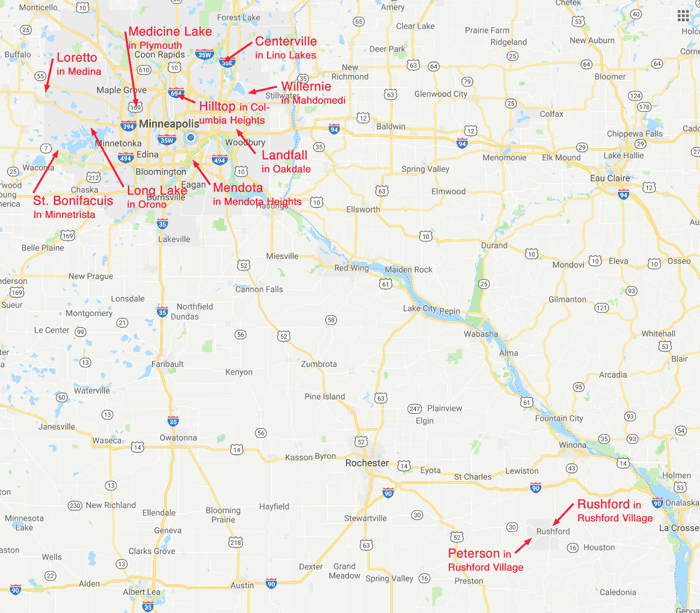 All eleven Minnesota doughnut cities. Nine are scattered around the Twin Cities Metro and two form a “double doughnut” in the southeast corner of the state. Click on the map for a larger version. 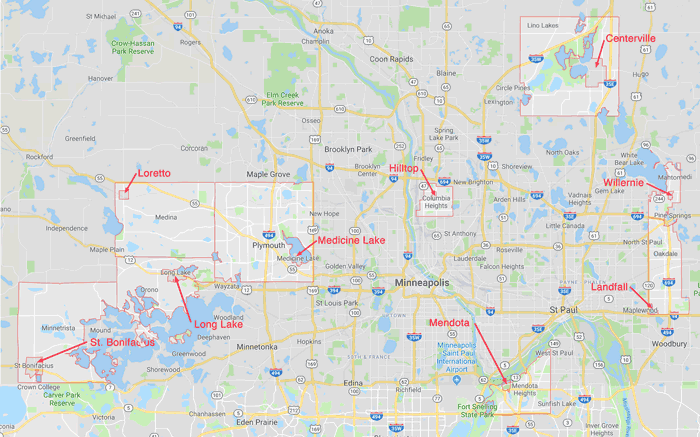 The nine doughnut cities in the Twin Cities Metro region. Click on the map for a larger version.

I learned the term “doughnut towns,” which I have adapted for this state as “doughnut cities,” from a prolific Wikipedia editor named Alan Sohn. He lives in New Jersey, which has 21 doughnut towns. In private correspondence Sohn cited a couple of articles that employ the term.

Wikipedia features a scattering of entries touching on the phenomenon of doughnut cities, but the information there is far from complete. In the process of this research I edited the Wikipedia entries for List of enclaves and exclaves and List of cities surrounded by another city to include all 11 city pairs identified here.

Minnesota’s doughnut “hole” cities embody a variety of historical reasons why they chose, and were able, to separate themselves administratively from their surrounding cities.

Several factors in Minnesota’s laws and constitution have allowed (or encouraged) the formation of doughnut cities. One is the lack of a definition at the state level that would forbid overlapping city boundaries. Some states have codified such a restriction, for example Massachusetts. Another factor operating in Minnesota is the relative ease of incorporating a city: that act requires only the signatures of 100 residents on a petition, followed by a majority vote of residents.

Two of our doughnut cities, Hilltop and Landfall, began life as trailer parks (and Landfall still is largely that); and in both cases the surrounding cities initially fought the separation. Several began their existence with settlement by a homogeneous group distinct from their neighbors — for example St. Bonifacius was settled by Germans (it was originally called “German Home”), and Loretto by a group of German and Dutch immigrants. Several doughnut cities represent the original village around which a larger sprawl grew in later years — Centerville is an example and Lino Lakes is the sprawl.

For later posts in this blog series I hope to visit the doughnut cities and profile their histories and current circumstances in some detail. For now I would just like to tell the story of the naming of Loretto.

Loretto was named by its original settlers for a town in Quebec, Canada now called L’Ancienne-Lorette. This town was founded in 1674 as a place of refuge for a group of native Hurons, who were fleeing a war with the Iroquois. A Jesuit missionary built a chapel for the Hurons and offered them protection. He named the area Lorette after the shrine of Loreto in Italy, which he had visited on several occasions.

The truly interesting detail for our purposes is that now L’Ancienne-Lorette is itself part of a doughnut city pair — it is completely enclosed by the city of Quebec.

None of the sources I could find speculated on how and why those particular German and Dutch immigrants knew of a small town in French Canada, 932 nautical miles distant as the jet flies, founded almost 200 years previously, and named for an Italian shrine. Or why they thought highly enough of that Canadian sanctuary town to name their new home after it.