↓
Home→Career→Aldus, Bembo, and the Semicolon

The semicolon was invented in 1494. I got to researching its creators; this investigation uncovered connections to the University of Minnesota, the Minneapolis Star-Tribune, and my own career. 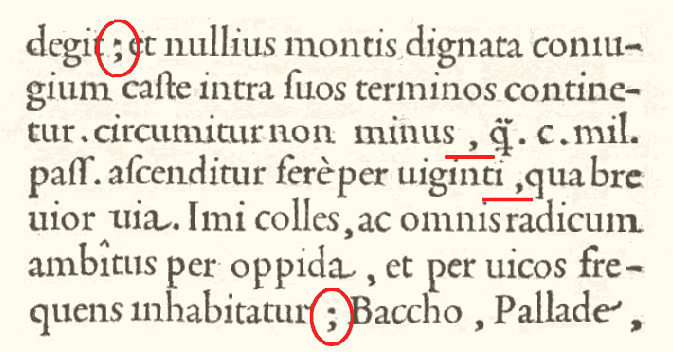 Part of a page from the Aldine edition of Bembo’s De Aetna. Semicolons are marked with ovals. The horizontal lines indicate the lack of convention or standards for the use of spaces around punctuation.

The humanists, the literati of their time, were admirers of the Roman and Greek writers of antiquity, and they strove to bring these ancient thinkers’ works to the reading population of the day.

Aldus Manutius and the Aldine Press

Aldus’s works, the Aldine editions, set the pattern for much of what followed in European literature. Aldus’s 1495 booklet of Bembo’s De Aetna (On Mount Etna) had a clean design, beautiful type, and wide margins, and would fit in a pocket (if pockets there were). Griffo’s typeface was instantly popular and turned out to be perhaps the most influential in the history of Western letters. 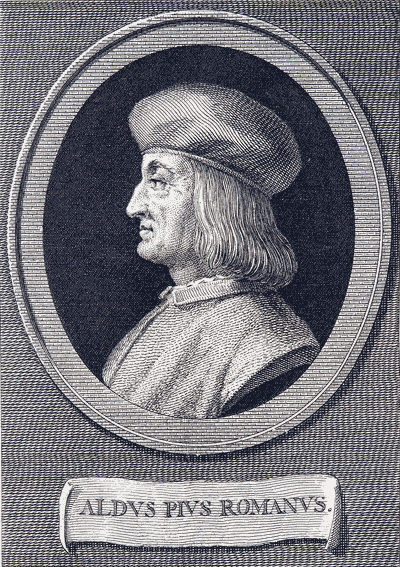 Aldus was the first to use an italic typeface in print — type he commissioned from Griffo in 1501. Aldus also introduced what today we would call the paperback: portable, relatively inexpensive editions of books in a size referred to as “octavo.”

Aldine put out 132 titles on Aldus’s watch (he died in 1515): Latin and Greek classics, dictionaries, and a few more modern works.

Griffo was the premier punch-cutter of his age. He got his start creating fonts inspired by the work of Nicolas Jenson, a French engraver, printer, and type de­signer working in Venice who had created one of the first Roman type faces a century before. (Sometimes the boosters of Griffo vs. Jenson for the title of most influential type designer can sound like foot­ball fans.)

Griffo worked with Aldus in Venice from 1494 until the two had a falling-out in 1502 — Aldus had pulled a fast one and sewn up the rights to use Griffo’s italic type for 10 years, without further compensation to the designer. This was just as Aldus had scored a Venetian government monopoly on the printing of Greek literature.

Griffo then moved to the city of Fano and thence on to Perugia, where he worked for other publishers, and in 1516 returned to his home city to start his own publishing operation. There, in 1518, in circumstances that remain shrouded in mystery, he beat his son-in-law to death with an iron bar — or so claims an indictment from the city authorities. There was a trial. It is believed that Griffo was executed for the crime. No one seems to know for sure. 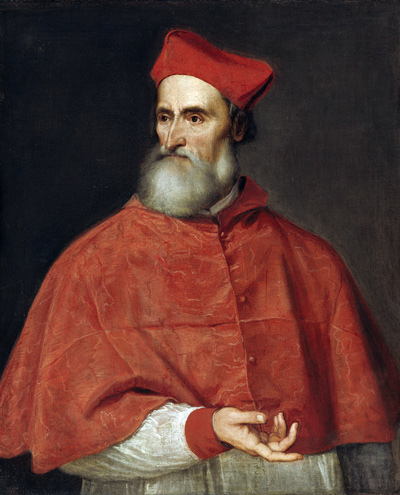 Pietro Bembo as a cardinal in a portrait by Titian.

Bembo was raised in an aristocratic Venetian family and when young traveled with his father Bernardo, a diplomat, to posts in Burgundy, Florence, and Ravenna. In later life Bembo was named a cardinal by Pope Paul III. Besides his scholarly classical work, his writings influenced the development and spread of a single Italian language (based on Tuscan), and his musical tastes helped to establish the madrigal as the most important secular musical form of the 16th century. Bembo’s collection of literature and art, begun by his father, was legendary in his lifetime.

Bembo’s pamphlet De Aetna recounts a journey up the volcano Mount Etna that he undertook in company with a student friend. In his literary reconstruction, Bembo presented the journey in the form of a Latin dialog with his father. His intention with the work was to demonstrate his considerable learning and to provide an example of how classical scholarship could be offered for a modern (quattrocento) literate audience.

Griffo’s type was a principal inspiration to Claude Garamond, among other later type designers. According to this account by the modern book designer Joel Friedlander, “Typefaces based on [Griffo’s] work include Poliphilus, Cloister Old Style, Aetna, Aldine, Griffo Classico, Dante, and Adobe Minion.” 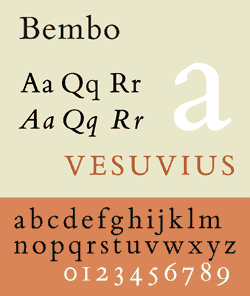 In 1929, the Monotype Corporation in England introduced the Bembo type family, created by the renowned type scholar and designer Stanley Morrison, based on the De Aetna letterforms and later refinements Griffo made to them. Bembo is what is referred to as an oldstyle type, whose design patterns are influenced by the hand calligraphy that reigned before the invention of moveable type in 1450. Friedlander’s essay, linked above, has a clear exposition on the influences from hand lettering on oldstyle letterforms.

Cambridge University has in its collection a printed copy of the first edition of De Aetna that belonged to Bembo himself (!); it is marked up with emendations for the next printing, in Bembo’s own hand. This copy came from Stanley Morrision’s collection and was probably the physical embodiment of his inspiration for the creation of Monotype Bembo.

Bembo was one of the more widely used typefaces of the XXth century for book work; it is still far from rare. For example Ta-Nahisi Coates’s 2016 book Between the World and Me was set in Bembo.

The Paris Review article linked at the top of this post is an excerpt from Cecilia Watson’s new book, Semicolon: The Past, Present, and Future of a Misunderstood Mark. In a review in the New Yorker, Mary Norris (“the comma queen”) called it “a scholarly treatise on a sophisticated device that has contributed eloquence and mystery to Western civilization.” My copy arrived today. 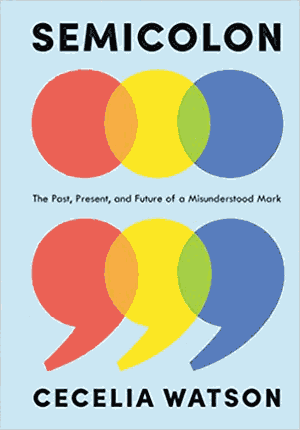 The semicolon’s invention came at a time of widespread experimentation with punctuation and other aids to communication. The semicolon, intended to represent a pause in a written text intermediate between that of a colon and a comma (and designed as a cross between the two), caught on immediately with the publication of De Aetna.

Watson mentions other marks that publishers were trying out that did not fare so well. Consider the punctus percontativus, a mirror-image version of the question mark intended for use after rhetorical questions. Introduced in 1580, it faded quickly from use.

In the 19th century a Belgian lithographer and a French poet proposed the “irony mark,” signified by the same mirrored question mark symbol. Heard of it? Me either.

And in this century the Sarc­mark has been proposed to signify sarcasm. It too has gone nowhere.

Aldus himself was not a fan of hard-and-fast rules for punctuating published work, nor were the humanists generally. They preferred to leave the matter up to the creativity of author and publisher to find the best way to communicate their material. This attitude prevailed for centuries, into the late 1700s. By the mid-19th century the codifiers had won out and the rules of punctuation we follow today (The Oatmeal has a primer) had been laid down, but not before decades of grammar wars had elapsed. One American tome on English grammar — which became the standard textbook for fifty years throughout England and America — made its author, Lindley Murray, the best-selling writer in the world from 1800 to 1840.

Once the semicolon’s use had been codified, the haters came out. They are still very much with us. Among the semicolon’s confirmed enemies are numbered George Orwell, Kurt Vonnegut, and the postmodernist Donald Barthelme, who called the mark “ugly, ugly as a tick on a dog’s belly.”

You may have noticed that I am no hater of the semicolon; in fact I love it perhaps too much.

Herman Melville did not despise the semicolon. Moby-Dick contains approximately one semicolon for every 52 words — over 4,000 of them.

Raymond Chandler used one, count-‘em one, semicolon in all of The Big Sleep.

Since 2013 the humble semicolon has gained a new significance: as a marker and a symbol of hope for the prevention of suicide and support for those with mental illness. If you see a black semicolon tattoo on someone’s arm (or elsewhere), what it means, likely as not, is that the person survived a suicide attempt. Other colors have other meanings with respect to mental health. The symbolism is just so perfect with the semicolon’s intended use; it marks not an ending but a choice to pause before continuing.

Paul Brainerd (can you imagine a more Minnesotan name?) arrived in Minneapolis in 1969 to attend the U of M for a master’s degree in journalism. He was coming from the University of Oregon, where he had “worked on” the student newspaper, the Daily Emerald. The quotes in the previous sentence are meant to suggest that Brainerd’s involvement went far deeper than that of an ordinary student getting some journalism experience. Brainerd rejiggered the printing arrangements for the paper, cutting costs in half, and he spearheaded a move to make the paper a non-profit independent of its university.

At U of M, Brainerd helped to manage the student paper, the Minnesota Daily, and upon graduation took a position with the Minneapolis Star Tribune as assistant to the operations director. Soon he was working on projects related to the paper’s collaboration with Atex, a Boston-area company that was one of the first to tackle newspaper automation. (Do you remember the newspaper scenes in Crocodile Dundee? Those were Atex terminals the newspapermen were banging on.)

From the Strib Brainerd made the jump to working for Atex, which sent him to the Northwest where they had a research and manufacturing center in Redmond, Washington. Soon enough Atex was bought by Kodak, and the new corporate overlord closed the Redmond facility.

Out of work, in 1984 Brainerd teamed with three ex-Atex engineers to build a publishing product for the then-new Macintosh computer and its (not yet announced) LaserWriter printer. He named the company Aldus after guess who. Brainerd funded the Seattle-based company with $100,000 of his own money, and for a year the engineers worked for half salary and Brainerd took none. When Aldus Pagemaker shipped in 1985 it greatly accelerated a revolution that was already underway in the publishing business; its impact has been likened to that of moveable type.

Along the way Brainerd coined the term “desktop publishing.”

My career has had a few intersections with this story.

In 1983 I went to work for a small Cambridge company, Texet Corporation, a venture-backed startup developing workstation-based, interactive, WYSI­WYG (what you see is what you get) typesetting systems for corporate publishing. We were developing the “big brother” to Aldus Pagemaker: large systems intended for publishing and managing long, structured documents. 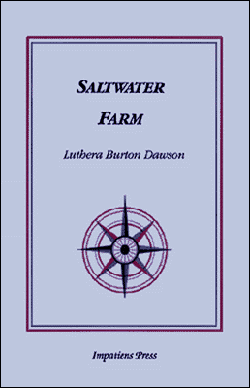 Moving from a software development role into product management, in 1985 I learned of Pagemaker and bought a copy for Texet to study. At the time Pagemaker seemed like a “toy” program to us, working as we were on “real” computers, not the puny Macintosh with its 9″ black-and-white screen. If I recall correctly, it was Pagemaker serial number 50 or so that arrived in the mail.

I left Texet in 1987. The company was kind enough to gift me with the Pagemaker software license on my way out the door, and I dutifully upgraded the license on my own dime each time Aldus released a new version. Within a few years I was working for… Kodak / Atex.

In 1993 I started Impatiens Press, initially to publish a manuscript my mother had written decades before. I used Aldus Pagemaker 4.2 on a Macintosh II-cx to produce print-ready masters for Saltwater Farm.