The source of the Mississippi River is the stuff of legends. Let’s excavate them a bit.

Last time out we followed the Rev. William Boutwell as he accompanied an expedition that identified the source of the Mississippi in 1832.

You may have heard the story behind the Northwest Angle, that little landlocked piece of Minnesota jutting above the 49th parallel. I just learned how it came into existence through (mis)information about the Mississippi’s source. We’ll delve into that in this post.

In the next post we’ll peer more deeply into the 1832 Schoolcraft / Boutwell expedition, and also look at four earlier expeditions that came to (what we now consider) incorrect conclusions as to the great river’s headwaters. 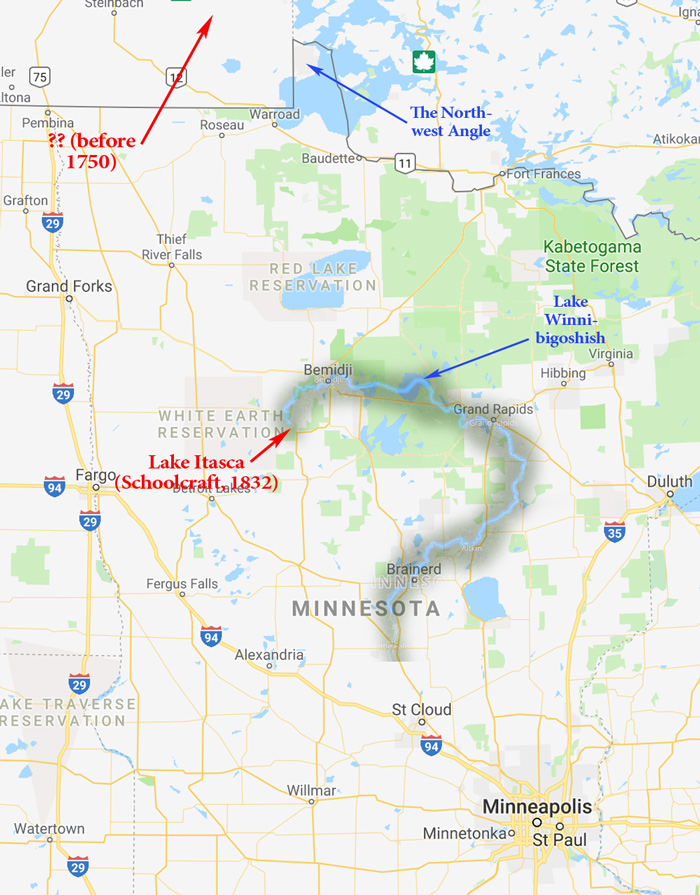 Upper Mississippi River, showing (in red) the location now considered the Mississippi’s source, and the location guessed at by 18th century mapmaker John Mitchell. The course of the river is overlaid: running north from Lake Itasca and then east before turning south.

The Angle is one of only six pieces of land in the lower 48 US states that you cannot get to in a wheeled vehicle or on foot without going through another country’s territory — a geographical anomaly called a “practical exclave.” You can take a boat over Lake of the Woods to the Angle; you can fly in; but if you want to drive you have to pass through 52 miles of Canada — 17 miles of that on a dirt road. (Well, in deep winter I suppose you could drive there over the frozen lake.)

The Red Lake Nation of Ojibwa owns 80 percent of the Angle, held in trust by the federal government.

The Angle is the northernmost township in Minnesota and home to the northernmost point in the contiguous 48 states. No bookstore, however. Its population, in 123 square miles of land, is 119.

A portion of John Mitchell’s 1754 map of North America (interactive original). Click the image for a larger version.

An Accidental Mapmaker — The Angle exists because an 18th-century mapmaker guessed at where the source of the Mississippi River was, and guessed it was north of the 50th parallel. He also drew the extremely irregular Lake of the Woods as an oval. This was one John Mitchell, a Virginia doctor and student of flora who moved to London and took up consulting with rich people about exotic plants. He had no background in mapmaking at all, and it’s safe to say he had never set foot or canoe in the northwest territories.

One of Mitchell’s garden clients was the Earl of Halifax, who had been appointed president of the Board of Trade and Plantations in 1748. Halifax was extremely concerned about the possibility of conflict with the French over the North American territories. Turns out he was right to be concerned: what we call the French and Indian War, and the British call the Seven Years’ War, started in 1756.

In 1750 Halifax had asked Mitchell to draw a map of North America that he could use in the halls of Parliament to bolster his case for not compromising with the French. Mitchell drafted one from the sources he could find in London; it proved lacking and Halifax put out a call for the American colonies to send over the best maps they had. Most did so. Using this improved source material, Mitchell produced a second edition map by 1754.

This map was published all over Europe and embodied most of what people on the Continent knew of North American geography up until the early 19th century. The map was printed in eight sheets; when assembled, it measured 6’5” wide by 4’6” tall.

Treaty Negotiations — It was Mitchell’s map that formed the basis for border negotiations in Paris after the Revolutionary War concluded. Ben Franklin had a copy. Here is the wording that ended up in the Treaty of Paris of 1783 regarding the US-Canadian (then, British Territories) border beginning in Lake Superior:

On the assumption that the Mississippi’s source lay to the northwest of Lake of the Woods, this formula would make sense — if a northwestern point on the lake could be identified. In reality it defines a geographically impossible border. 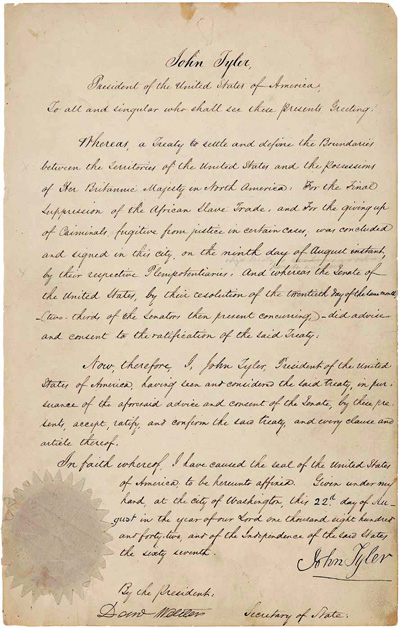 The Webster-Ashburton Treaty of 1842. Click the image for a larger version.

Straightening It Out — That northwestern point of Lake of the Woods was located in 1825, by the second expedition tasked to do so. Already by 1798 the Canadian explorer David Thompson had identified Turtle Lake as the source of the Mississippi (mistakenly, but he was not far off). Those who knew of Thompson’s explorations already credited that the Mississippi’s headwaters lay south of Lake of the Woods, and so had reason to believe that the above definition for a border was nonsense.

In 1818 the contours of the current Northwest Angle border were agreed between the US and England, with the border dropping staight south to the 49th parallel from the designated northwestern-most point of Lake of the Woods. It wasn’t until 1842 that the lines were actually nailed down in a treaty — 17 years after the northwestern point of the lake had been found and 59 years after the Treaty of Paris was signed.

See this 2014 piece in MinnPost for an exhaustive treatise on the history of the US-Canadian border, the inadvertent creation of the Angle, and its defense and maintenance by US negotiators over many decades. US officials persistently rejected any wording that would change the 1783 document under which the nation had gained its independence.

Give It Back? — Early this year an anonymous someone added a petition to the We the People section of the whitehouse.gov website requesting that the US turn over the Northwest Angle to Canada. Even though the story got a fair amount of local press attention, the question garnered only 5,500 signers in a month’s time. The guideline is that 100,000 signers are needed to trigger the White House to look into whatever the question is and to respond. According to the Strib, “Angleites” gave the idea a big thumbs down.

A Road Trip — We haven’t been up to the Northwest Angle yet. Until we go, enjoy this account of a road trip to Angle Inlet by a pseudonymous Minnesotan, “Seth5544,” who blogs about roadside attractions. His lively prose and photos convey the flavor of the journey. A sample:

“The turn off the main road past the Canadian border entry in Warroad is not marked. There are no signs telling you how far it is. You would have no idea it even exists until you are almost to the border. In fact, you cross the border and travel another 8 miles until you reach Jims Corner [where you must check in with US Customs], which is hardly marked. Even after that, it’s still not obvious where you need to go. Bring a GPS.”

I would fully expect cell phone coverage to be nonexistent up that way. We lost coverage well before reaching the Lost 40 last year, north of Lake Winnibigoshish, and that’s a good 120 miles to the south. A GPS app should be able to deliver your latitude & longitude, as long as the phone can see 5 satellites in the sky, but don’t expect Google Maps to paint a picture of your location.