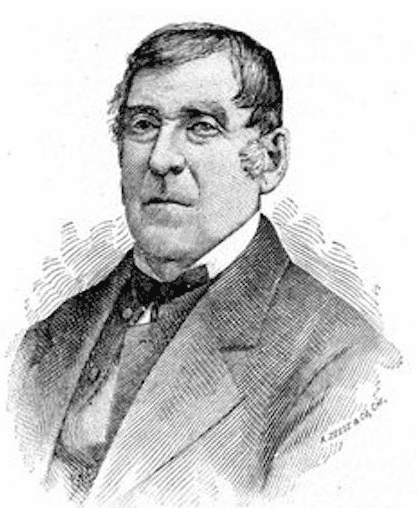 The Reverend William Thurston Boutwell has been in the Twin City news lately, as his house near Stillwater MN was saved from demolition and is being renovated.

The name “Boutwell” immediately caught my eye because a similarly named 19th-century gentleman figured large in the history of my former home town, Groton MA.

Were these two Boutwells related?

George Sewall Boutwell grew up near Groton, and worked in a store there as clerk and partner for 20 years. Oh, and he also served as a Representative and a Senator from Massachusetts, as Governor of that state, as the first head of Internal Revenue (un­der Lincoln), and as secretary of the Treasury (under Grant). He also mostly wrote and managed the ratification pro­cess for the 14th and 15th amendments to the Constitution. And (as a staunch Abolitionist) was one of the core founders of the Republican Party. And was the floor manager for the impeachment of Andrew Johnson. 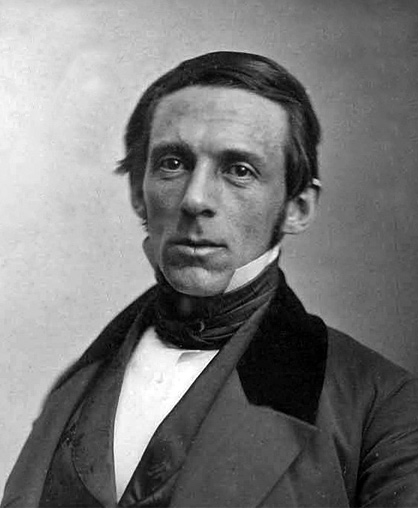 Boutwell’s house on Main Street in Groton (see photo below) is now the local historical society, and on the National Register of Historic Places. President Grant spoke to a crowd from its balcony. The store Boutwell worked in is — the house we used to live in, up the road in Groton.

This gentleman (woodcut at upper right) was born in 1803 in Lyndeborough NH. He graduated from Dartmouth College in 1828 and then Andover Theological Seminary in 1831. Boutwell’s first posting as a newly minted Congregational minister was as a missionary to the Lake Superior Chippewa (Ojibwa) in the then nearly wild land of Minnesota. Boutwell journeyed to La Pointe on Mackinac Island and proceeded to learn the Ojibwa language. Just a year later, he was invited to accompany an expedition headed by Henry Schoolcraft, the Indian agent at Sault Ste. Marie. This was to be an extensive tour of the northwest Indian nations. The party ended up discovering the source of the Mississippi River, whose location had been in dispute among the white men for decades. It was no particular mystery to the natives.

Schoolcraft wanted to name the source lake with something classical; he preferred Greek. No one in the party knew enough Greek but Boutwell had decent Latin. He translated “true head” as “veritas caput,” and the central letters from that phrase named Lake Itasca. (Here’s a brief account of my visit to the headwaters last year.)

Boutwell went on to found the first Presbyterian congregation in Stillwater MN — a community that continues to this day. He preached in a number of other churches in the area and the Congre­ga­tion­alists and Methodists in Stillwater also count Boutwell among their pioneer clergymen. 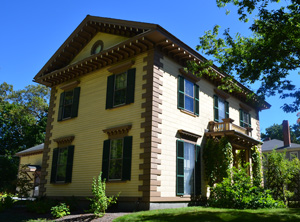 Various sources, including this one at Google Books, de­scribe George Bout­well’s early education, which ended when he was 13, and his taking a position in a store in Groton Center. He worked diligently in off hours, by all reports, to remedy his lack of formal schooling (there’s an echo of Lincoln here). Studying the law, Boutwell found a mentor in Bradford Russell Esq., a practitioner living upstairs from his store. He was set to take the bar exam at age 21 when the shopkeeper offered him a partnership in the large and profitable store; he accepted. Boutwell began his political career in 1839 and continued an association with the store until 1855.

No source I found names the shopkeeper who took on Boutwell or identifies the store by name. Considerable evidence points to the building having been what was called Gardner’s Store from 1787 into the 1840s, and the Gerrish Block from 1852. Our home in Groton was one of the two buildings making up the complex so named.

Rear of the 1787 Gerrish Block complex in current time. The masthead at the top of this page shows Groton’s Gibbet Hill, which was pretty much the view out of those windows in the rear of the “ell.”

The buildings were moved several times within the town (people did a lot of that in the 19th century). After 1818 our portion of the structure was moved across Main Street and attached to Gardner’s Store as an “ell.” It served as the post office for some years. In 1885 the main building was moved to its present location and converted to a residence, and the ell was moved and re­attached (on the other side of the building this time) in the early 1920s, becoming a barn in this incarnation. It was renovated to living space in 1989. (The then owner had tried to have the work done in time for the house’s bicentennial in 1987, but difficulties with licenses slowed the process.) The names of two workmen are scribed into the cement of the 1920s-era foundation.

And the legend “Geo S Boutwell Groton” is (possibly) burned into a timber in the basement ceiling. My surmise is that George did this while still a teenage clerk in the store that was then called either Park and Woods or Park and Potter, in the early 1830s.

Boutwell signature (?) on a beam in the basement of our former house in Groton MA. It may be burned into the wood, but in fact the looseness of the script suggests a brush and (possibly) India ink. So there is no knowing when this legend was added or by whom.

So were Rev. William and George Boutwell related?

They were third cousins. (Click the image for a larger version.) 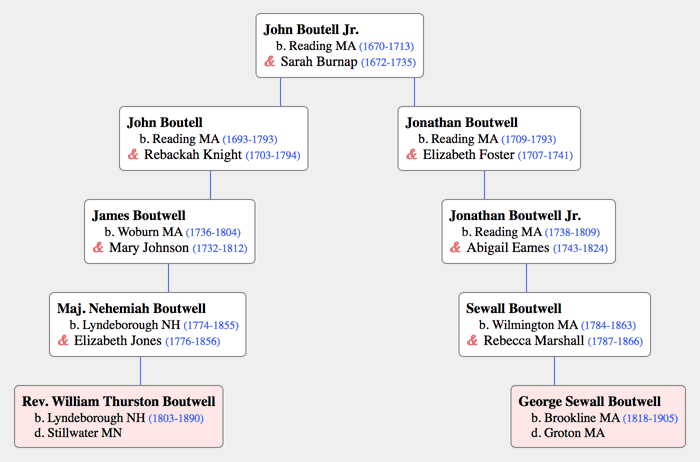 Genealogical chart showing the two Boutwells descending from a common ancestor in New England. Note that the name was variously spelled Boutell, Boutwell, Boutelle, etc., especially in and before the 18th century. Thanks to Ancestry.com for providing the resources that allowed me to figure this out.