↓
Home→Breakfast→Venerable Hole in the Wall

Recently my wife got me over to Al’s Breakfast in Dinkytown, as she has been wanting to do since before we moved here.

The place is a time capsule from its founding in 1950. Katharyn occasionally had breakfast at Al’s (413 14th Ave SE, Minneapolis) before early classes at the U of M — infrequently, because it was a bit of a splurge on a student budget.

Fast forward to today: the food is spectacular. It’s all made from scratch and pretty much unchanged since Al Bergstrom created the menu 69 years ago. (Though I expect that some of the trendier ingredients might have been added to the mix more recently.) 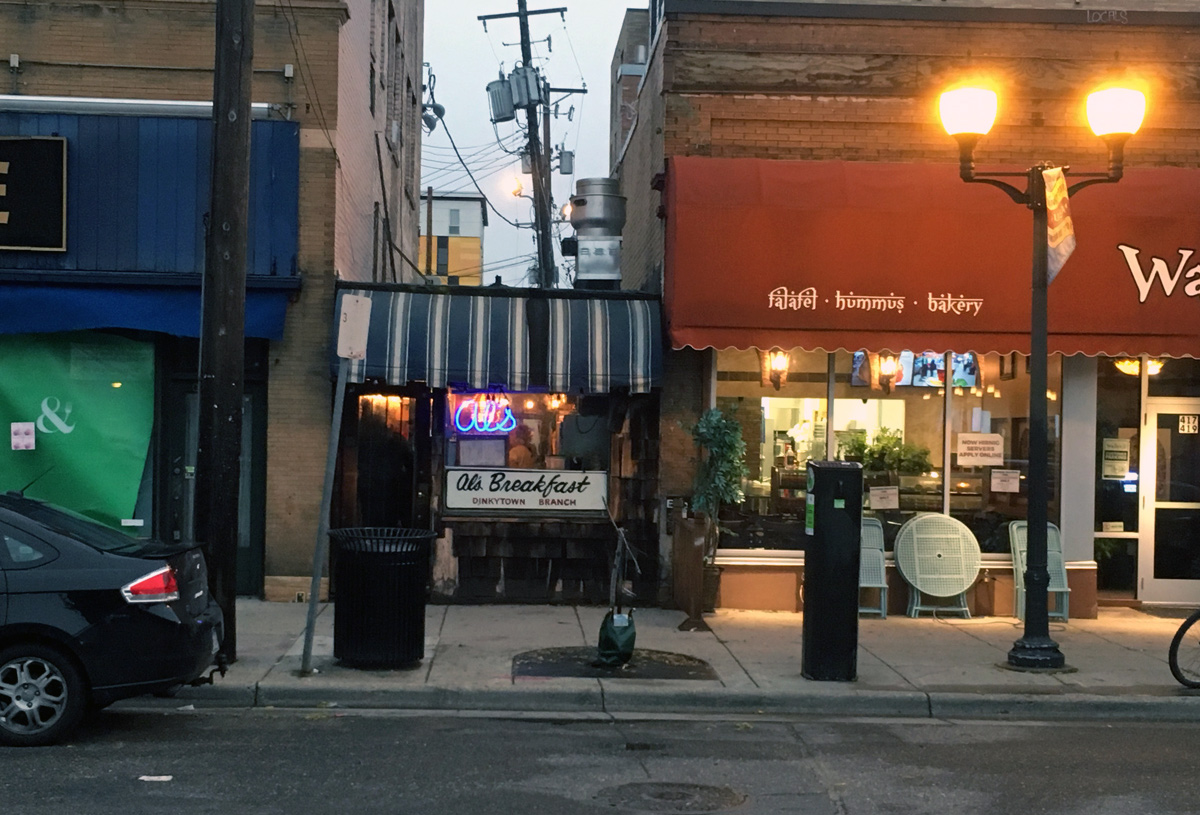 Al’s is built in what used to be an alley. It was originally a shed in which the hardware store next door stored plumbing supplies. It is the narrowest restaurant in Minneapolis: 10 feet wide. The site hosted a Hunky Dory hamburger stand before Al took it over in 1950. Various restaurants came and went at the site from 1939, with nearly annual turnover of ownership until Al bought it. He served three meals a day, seven days a week, for 7 years until changing over to a breakfast-only format in 1958. At this point the name was changed from Al’s Cafe to Al’s Breakfast. Al added the ironic coda “Dinkytown Branch” to the sign out front, as a jab at the growing trend to chain businesses. There are not and never have been any other locations. 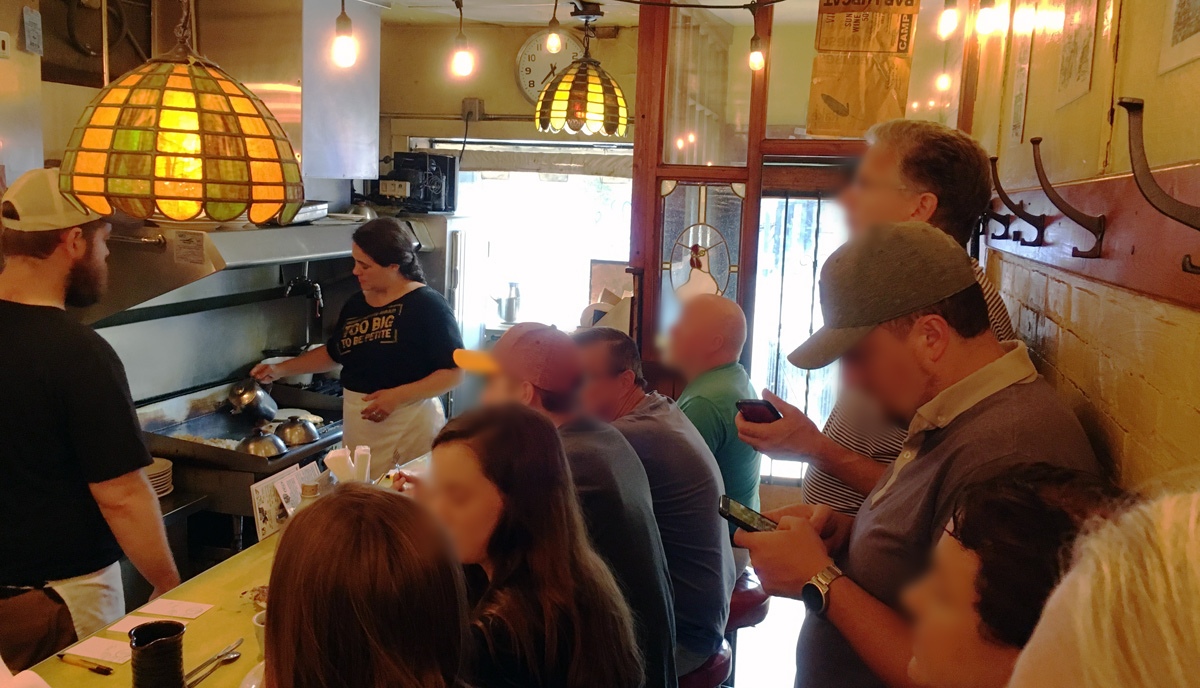 There are exactly 14 stools at the counter. We went early on a Saturday morning, arriving before 7:30 (the diner opens at 6:00), and the stools were already all occupied and “only” 8 people were waiting. We joined the expectant line, hovering patiently behind the diners. You can see from the photo how close the quarters are (click on it for a larger version). Imagine how much cozier it all is in the winter when those hooks are festooned with large puffy coats, perhaps dripping. The woman at the grill is Alison Kirwin, the current co-owner.

Diners are frequently asked to move over one or two stools to make room for a new party. Sometimes you occupy three or more stools over the course of breakfast. The line often spills out onto the street, especially during the school year. 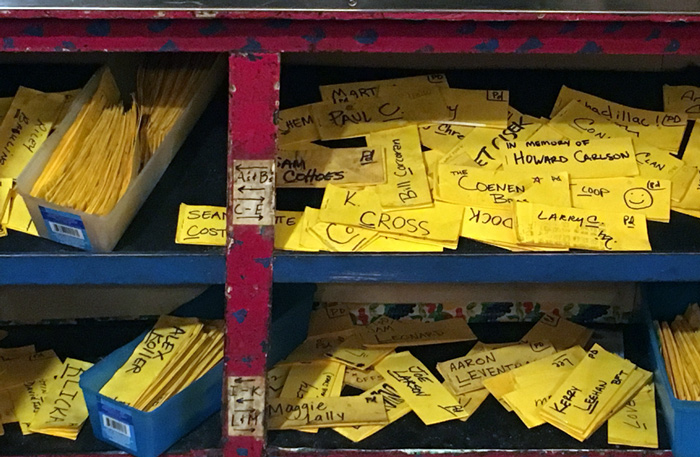 This photo shows prepaid “meal books.” This custom ac­commodated local railroad workers who got paid once a month in cash. Some sources claim that Al originated the meal books, but this morning a staffer told us that Al had inherited it from the previous establishment. There are 200 to 300 of these chits on file now, some of them dating from the 1960s (older, inactive ones are segregated in containers like the ones in the photo). A customer told us that parents sometimes buy one for their kid attending the U of M. The apparent jumble of meal books is in rough alphabetical order so the staff can locate them at need.

Al’s Breakfast made Esquire’s list of the 51 best breakfast restaurants in America.

On the name Dinkytown

This area, in the Minneapolis neighborhood of Marcy-Holmes, has been called Dinkytown since at least 1948. I learned of a plausible speculation on the name’s origin from the omni­present James Lileks.

There’s a building called the Grodnik block, probably erected by the family behind a similarly named clothing store of yesteryear. (The building now houses the Loring Pasta Bar; it’s also where Bob Dylan lived in Minneapolis.) “Grod” is a word for city or town in various Slavic languages, e.g. Polish, and “nik” is a diminutive. According to the Wikipedia article on Dinkytown, one of the brothers in­volved in the haberdashery, Hela Grodnik, used to claim responsibility for naming the region when he said, “This is getting to be a real ‘Dinky Town.’”

Other theories exist, including one involving small trolly cars called Dinkys, but I’m sticking with the Slavic.

According to a long and excellent profile in the Twin Cities Daily Planet, penned by a regular and fan in 2013, Al’s is also listed in the New York Times compendium of the 10 best breakfast places and USA Today’s tally of the 10 best pancake houses in the nation. But I couldn’t find online sources for either of those claims.

The place rates 4 stars on Yelp, 4.6 on Google, and 4.8 on its Facebook page (but c’mon, these are people who have already said they Like it). Local legend and former PiPress and Strib columnist James Lileks declares, “Best breakfasts in the world. Ever. Period. End of story. No debate necessary: trust me.”

Al’s recipe for buttermilk pancakes was featured in the October 1994 issue of Gourmet Magazine. And the blueberry-walnut pancakes won an America’s Classic award from the James Beard Foundation (the food industry’s “Academy Award”) in 2004.

On a recent visit I asked if the Beard Foundation prize was on display, and our waiter pointed it out. There’s something quintessential about the vibe of Al’s Breakfast in the gesture of practically burying the token of one of the trade’s greatest honors amid a tsunami of toys, foreign currency, and a hand-painted sign reading “Tipping is not a city in Russia.” 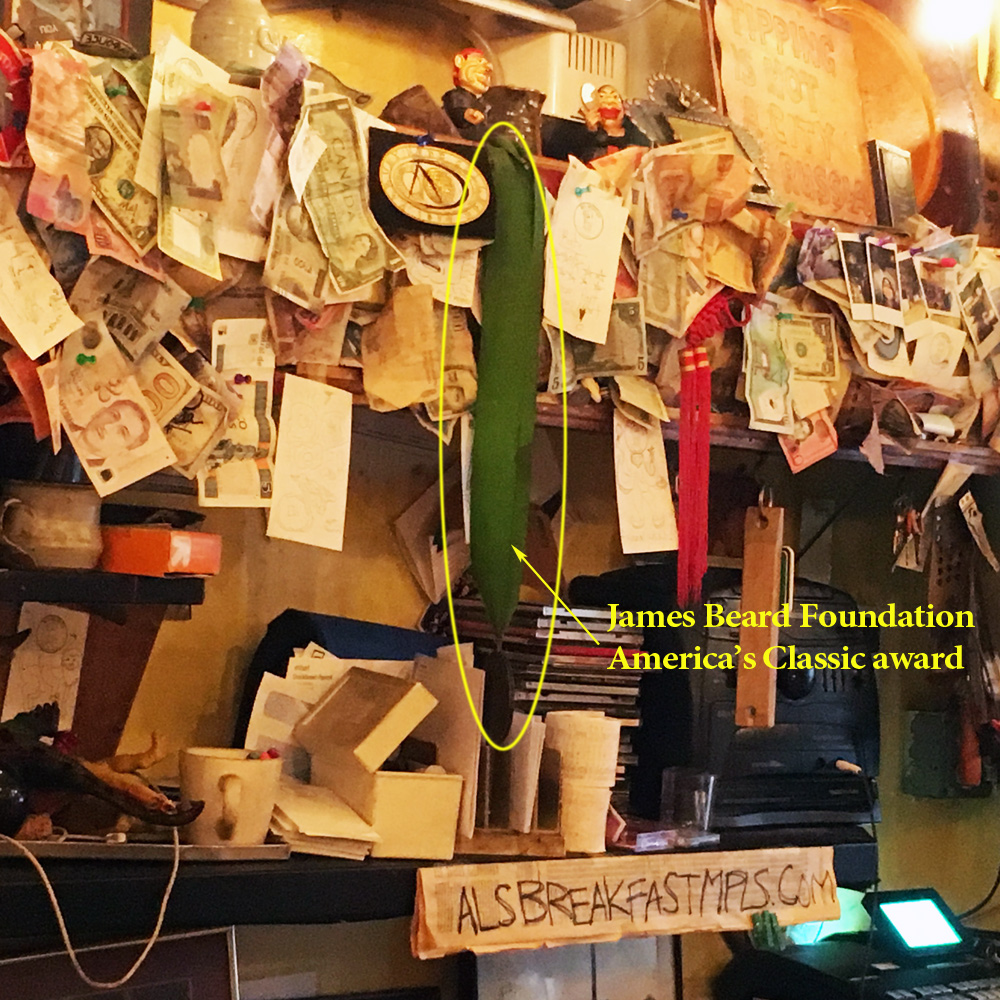 A local composer and music professor at the U, David Baldwin, is a regular at Al’s; he has composed Music for Al’s Breakfast for Brass Quintet. It was played on the sidewalk outside the restaurant on May 15, 2000, the establishment’s 50th anniversary. Here is the first movement, titled Coffee?.

A couple of pointers for those planning to visit this singular place: First, Al’s only accepts cash or a personal check (or your prepaid meal book). Second, if you want to avoid the line, try going on a Tuesday, Wednesday, or Thursday after 10:00 am.

In another sense of “tips” (nothing to do with a city in Russia): The restaurant splits them among the employees. There is no hierarchy. Here are the two current owners on the subject of how the staff organizes itself, from a 2016 Star Tribune interview. Alison Kirwin: “You always start as a dishwasher. We like to think that dishwashing is the top of the heap at Al’s Breakfast, and you work your way down, or sideways, or something, to get up front.” Doug Grina: “Who doesn’t love the dishwashing station? People fight over that station. If you’re hung over, that’s the place to be. There’s not a lot of critical thinking involved, it’s just washing the dishes.”