↓
Home→Exploring→Sorting All the Saint Anthonys

Ever wonder about the various places named Saint Anthony strewn about the Twin Cities? I have long been confused by the many levels of names, official and unofficial, for areas and neighborhoods hereabouts. Allow me to share some of what I learned in studying the subject of the myriad Saint Anthonys.

Here they all are on a single map. 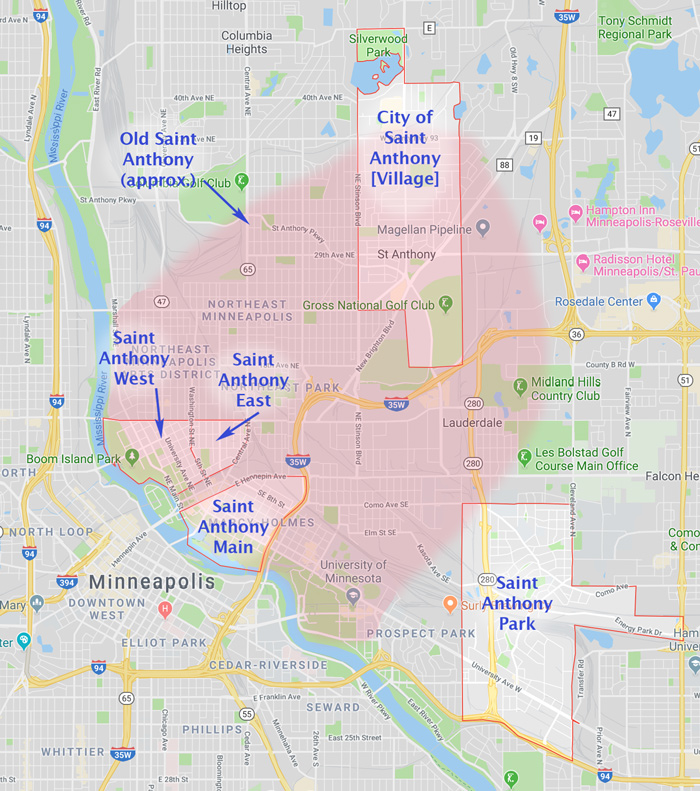 All the towns, communities, and regions named Saint Anthony. I never was able to find a definitive map of the 19th-century town of Saint Anthony, so its extent to the east of the river as shown here is at best approximate. Click the image for a larger version.

The name Saint Anthony in these environs dates from the 17th century, from 1680 to be exact, when Father Louis Hennepin became the first European to set foot in the area. He named the great falls on the Mississippi River for his patron saint, Anthony of Padua: Les Chutes de Saint-Antoine or Saint Anthony Falls. Of course the Falls had long had names and spiritual significance bestowed by the native populations living here at the time. To the Mdewakanton Dakota they were mnirara “curling waters,” owahmenah “falling waters,” or owamni “whirl­pool.” The Anishinaabe (Ojibwe) called the falls gakaabikaa “split rock,” or more de­scrip­tively, gichi-gakaabikaa “the great severed rock.”

Fort Snelling was constructed and manned by the early 1820s. The Army had control of the falls on both sides of the river, but did little to develop the water power promised by this natural resource.

That didn’t start happening on the east side until after 1838, when Franklin Steele, the sutler (shopkeeper) at Fort Snelling gained control of half a mile of riverbank on the east side by sharp dealing. The base commandant had evicted around 100 squatters living near the falls on the east side (these people moved down the river and set up a camp that eventually became St. Paul), and had convinced the government to release east bank land for settlement. Steele was able to file his own claim before dawn on the day settlement opened. Some accounts say he built a cabin on the east side by moonlight and offered breakfast to the soldiers who arrived to take possession.

But Steele was short of capital and took 10 years to construct the first dam on the east side of the river; he also laid out the town that would become Saint Anthony. 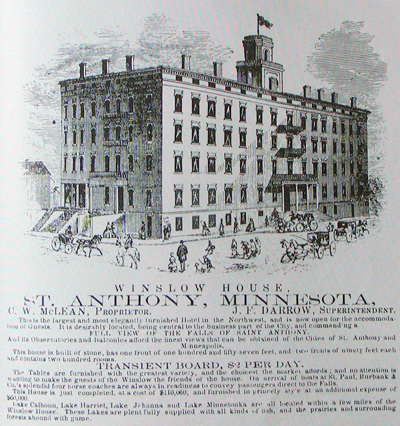 1860 advertisement for Winslow House, enticing rich southerners to come north with their slaves for the summer (illustration from Wikimedia, public domain).

In 1855 the first (wooden, suspension) bridge was constructed above the falls to connect Saint Anthony to the town of Minneapolis rising to the west. By 1860 Saint Anthony was bustling, and although it was a hotbed of abolitionism, the town was a favo­rite summer destination of wealthy southerners who came upriver by steamboat with their slaves to stay at the elegant Winslow House. Minnesota had entered the Union two years previous as a free state.

Abolitionists contrived to free an en­slaved woman, Eliza Winston of Mississippi, and a judge ruled based on the new Minnesota constitution that she was free. Such a “states’ rights” ruling, in this case by a Republican (anti-slavery) judge, was a common tactic in northern states to defy the Supreme Court’s infamous Dred Scott decision of 1857.

The ruling kicked off weeks of unrest among abolitionists, more moderate Republicans, and Democrats eager to encourage wealthy southerners to come north to spend their money. Houses were stoned, press equipment thrown into the river, and so forth; no one was killed. The unrest didn’t subside until word emerged that the freed, formerly enslaved woman had slipped away to Canada.

At this time Saint Paul’s population was around 10,000, Saint Anthony’s 4,700, and that of Minneapolis merely 3,400. Yet Minneapolis had the momentum. The city on the western bank was growing faster as a result of moving more aggressively to claim a share of the falls’ water power. By 1872, when the town of Saint Anthony agreed to be absorbed into Minneapolis, the latter city was on its way to becoming the flour milling capital of the world. 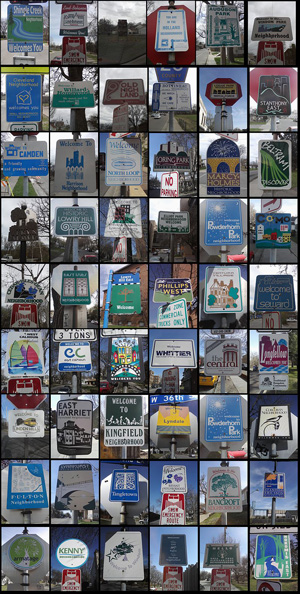 Welcome signs for 72 Minneapolis Neighborhoods (photo by MinnesotanUser in Wikimedia, CC BY-SA 4.0). Click the image for a larger version.

Minneapolis is organized into 11 official Communities comprising 84 Neighborhoods; both categories make a complete tiling of the city and no Neighborhood crosses Community boundaries. The Communities contain between 4 and 13 Neighborhoods, each of which is more or less cohesive in terms of socioeconomic status, housing stock, etc. Some Neighborhoods date from the 19th century and some were only named as recently as the 1980s.

The Neighborhoods were made official in the early 1990s with the creation of the Neighborhood Revitalization Program; they are the basis of local funding from the city, disbursed as guided by Neighborhood Action Plans. There are fewer NAPs (73) than Neighborhoods (84), as some of the latter have combined forces for the sake of efficiency.

In contrast, Saint Paul does not employ the concept of Communities, instead being subdivided into 17 neighborhoods or Districts, each of which is larger than any of the Minneapolis Neighborhoods.

(Both cities have another kind of subdivision, the Wards, whose purposes revolve around politics and elections; their boundaries are not fixed and typically change after each decennial census to maintain roughly equal populations. The Wards do not correspond or relate directly to either Communities or Neighborhoods.)

But back to Saint Anthony East and Saint Anthony West. Both Neighborhoods are participating in the revival happening across Northeast Minneapolis, as developers push to build high-end housing and commercial pro­jects there. Saint Anthony West has decided to provide a bit of counterbalance to this tide of development: in 2004 residents revived an arrangement with the Minneapolis Parks and Recreation Board and the Minnesota Pollution Control Agency to reclaim the 12-acre riverfront B.F. Nelson site as public open space. 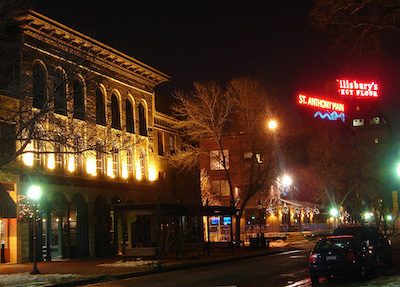 Saint Anthony Main by night (photo by Mark Vancleave in Wikimedia, CC BY-SA 3.0). Click the image for a larger version.

This unofficial name is now well recognized (e.g. Google Maps knows about it) to designate an area on the east side of the Mississippi, south of Saint Anthony East and Saint Anthony West. The name originally applied to a commercial development on Main Street along the riverfront, but over time it came to refer to the section of the East Bank surrounding that development.

If you cross the Stone Arch Bridge on foot heading east, Saint Anthony Main is where you reach land.

The neighborhood is home to several high-end condominium developments and now boasts a theater complex, three hotels, a number of bars and restaurants, design firms, distilleries, and other trendy denizens. Including a Segway tour company.

A full-fledged city of this name exists to the north and east of Minneapolis. Appending “Village” to the name of the city is both widely practiced and officially sanctioned. The appendage doesn’t disambiguate this instance of Saint Anthony in any significant way; in fact the old 19th-century town was sometimes called the Village of Saint Anthony. (Also the Township of Saint Anthony.) When Minneapolis annexed the old town, what is now Saint Anthony Village remained an independent, mostly agricultural community. It was incorporated as a city in 1945.

Signage at a border of Saint Anthony Village (photo by RxS in Wikimedia, public domain).

This city straddles the line between Hennepin and Ramsey counties. A surprising number of cities in Minnesota have this bi-county characteristic — 44 of them according to Wikipedia, or 5% of the cities in the state. And, as noted in a previous post, in some cases county lines were moved to accommodate mergers or annexations.

Saint Anthony Village has a municipally owned liquor store, established 1948. It’s the only place to buy booze in the town. This whole concept was unfamiliar to me and I did a bit of reading on Minnesota liquor customs. Turns out, 190 cities in this state run such municipal monopolies (out of a total of 853 cities: 22%). Their results are tracked by the office of the state auditor and reported annually — $23.1M in net profits in 2017. Fifty-nine municipalities, most of them outside of the Metro, took a loss on their liquor operations in that year. Here’s a 2015 op-ed in the Strib arguing that cities have no business being in the alcohol business. Saint Anthony Village does not say out loud on its website how well its liquor operation does for the city, but the state auditor reports that it cleared $207K on sales of $5.7M in 2017.

This iteration on the name is a District in the northwest corner of Saint Paul, one of 17 that comprise the city — equivalent to Minneapolis’s Neighborhoods, but individually larger. As far as I can tell, Saint Anthony Park was not within the boundaries of the old village of Saint Anthony. It has proven difficult to find definitive answers to questions such as this; I never did locate a canonical map of 19th-century Saint Anthony. 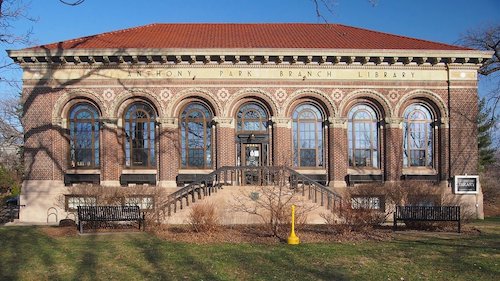 This District contains a lively center along a couple of blocks of Como Avenue, including a 1917 Carnegie library on the National Register of Historic Places, coffee shops, a bookstore, a Victorian tea room, clothing stores, etc.

The neighborhood is close to the St. Paul campus of the U of MN. Ac­cording to a presentation by Macal­ester College professor of geology David A. Lanegran, early faculty members at the U’s St. Paul campus settled in Saint Anthony Park and “worked hard to make it into their version of a college town in the city.” Faculty / emeritus / emerita still figure in its population. Comparing SAP’s demographics to those of my own neighborhood amid three colleges, Macalester-Groveland, we find that a larger proportion in SAP’s population hold graduate or professional degrees (36.9% SAP vs. 34.1% M-G).

The neighborhood has an email list for residents, active since 2001, with over 1650 subscribers, per its unofficial website. The domain name, sap.org, is venerable: first registered in 1996. A 3-character .org address counts as a rarity and a valuable one.