↓
Home→Exploring→Sorting All the Saint Pauls

Ever wonder about the various “little Saint Pauls” scattered seemingly at random around this city? There’s North Saint Paul (to the northeast), West Saint Paul (due south), and South Saint Paul (which is indeed south, on the city’s eastern extremity). Then there’s the West Side in Saint Paul, which is not a city but a neighborhood; though it was once a city called West Saint Paul. And the West End is an old colloquial name, still in use, for the district now called West Seventh / Fort Road.

No East Saint Paul exists, although there is the Greater East Side neighborhood in the far northeast corner of the city.

Here they all are on a single map, after much cajoling of Google Maps and wrangling in Photoshop. Click the image for a larger version. 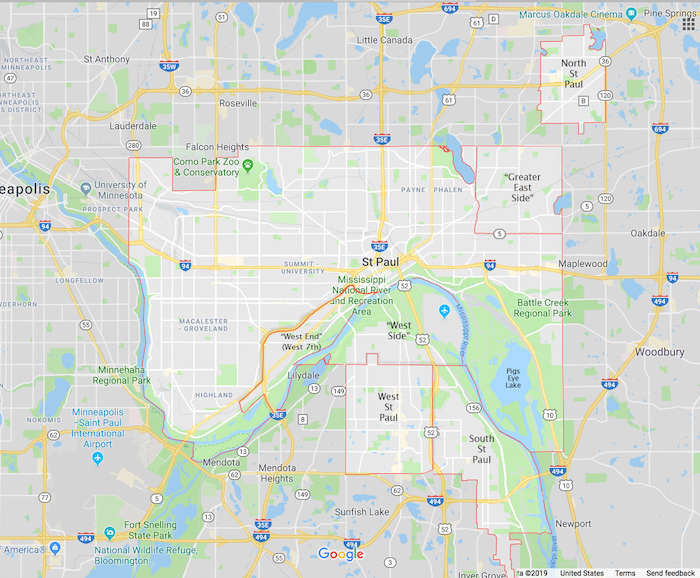 Saint Paul and its compass-direction named suburbs and neighborhoods.

Over this entire region the Mississippi makes a lazy sideways S shape, flowing south, then east, then north, then east again, and finally back south. So in some sense the river has three west banks and three “west sides.” That S is about 9 miles east-to-west and 4 miles north-to-south, and its meanderings define and shape Saint Paul.

The West Side today is a vibrant neighborhood with a substantial Hispanic population (and one of the largest Cinco de Mayo celebrations in the US), with a scattering of Lebanese, Syrian, and other immigrants. The Saint Paul Downtown Airport occupies the eastern portion of the region. The West Side would be considered to be on the west side of the Mississippi only if you were standing by Pigs Eye Lake — which tradition says is where the region’s first non-indigenous settler, the whiskey dealer Pigs Eye Parrant, moved to in 1840 after the army ejected him from his cave near Fort Snelling. (He was a bit of a lowlife, was Pigs Eye, and he was selling hooch to the soldiers.)

This arrangement lasted until 1874, when what had been West Saint Paul asked the City of Saint Paul to annex it, and got that ratified by a vote of citizens in both Ramsey and Dakota counties — for the change in status entailed moving the Ramsey County border southward.

Down by the river on the West Side, where the Riverview Industrial Park is now located, a vibrant slum existed from the 1850s to the 1960s. The land flooded pretty much every spring. Jewish immigrants began arriving there in 1882 during the genocide in Russia, and by 1915 over 70% of the residents were Jewish. Other immigrants such as Christian Syrians and Mexicans moved in, diluting the Jewish population (as the Jews who prospered moved up the hill) so that the proportion had fallen to about one-third by 1931. Residents of the West Side Flats were moved out beginning in 1961 as the city bought up property for the industrial park.

This city split off from South Saint Paul in 1889, because its mostly agricultural population had little use for the modern progress boosters who ran businesses, such as the stockyards, along the river to the east. The name West Saint Paul made a kind of sense at the time: the area had been known as West Saint Paul Township, and it was, well, to the west of South Saint Paul at its birth.

West Saint Paul has a peculiar bump on its northern border, called “the 40 acres.” This land was excluded from the transfer to Ramsey County when the West Side annexation by Saint Paul went down, because it comprised the farm of one Philip Crowley, superintendent of Dakota County schools, who had a powerful desire to remain in that county.

Crowley was also instrumental in the “secession” of West Saint Paul from South Saint Paul two years later; he served as the West’s first mayor.

This city was formed in 1887, just two years before West Saint Paul decided it wanted to chart its own course. The departure of the western region caused major short-term problems for South Saint Paul — several council members went with the West so new elections had to be called. And West Saint Paul was home to five of the nine schools then in operation, so South Saint Paul faced a sudden crisis of academic overcrowding. 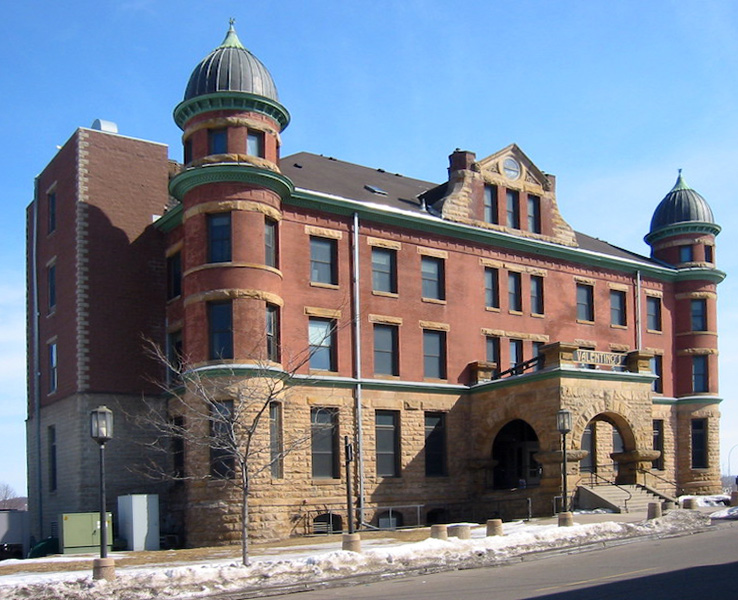 The Stockyard Exchange Building went up in South Saint Paul in 1886; it was home to hundreds of livestock-related businesses over the years. The Exchange is on the National Register of Historic Places. Today it is called the Historic Concord Exchange and serves as a venue for weddings, parties, and corporate events.

In 2015 Lois A. Glewwe published South Saint Paul: A Brief History and you can read a few pages of it at Google Books. She describes the founding moment this way: “In January 1887, a delegation representing the industrialists and livestock men from the riverfront businesses was able to organize and write a new charter for a new city that they wanted to call South Saint Paul.”

The railroad was the making of this city, as it was for so many towns across the midwest and west. In 1884 the Saint Paul railroad magnate Alpheus Beede Stickney zeroed in on the river flats of South Saint Paul as the ideal location for stockyards to rest, feed, water, and fatten up cattle before moving them by rail to Chicago for slaughter. The Chicago Great Western Railway line began construction in 1884 southward towards Hastings, and reached the Iowa border within a year. Once the stockyards were established, entrepreneurs began flooding in to South Saint Paul to capitalize on what was becoming a boom town.

Here was another city whose creation was catalyzed by a rail line.

By the 1880s, Henry Castle, a Saint Paul lawyer, politician, real estate developer, newspaperman, and author, had been accumulating land north and east of Saint Paul with the intention of establishing a planned community there. In 1885 the Wisconsin Central Railway Company completed construction of their line across Castle’s land, connecting it to Saint Paul. Castle pulled the trigger on his plan, and in 1886 the city was officially platted and named “Castle.” Between May and December of 1887, a brick school house, 6 churches, 12 factories, 20 retail businesses, and more than 80 homes were constructed in North Saint Paul.

The name was changed to North Saint Paul some time after March 1887 (I couldn’t pin it down any more than that) when Castle and four associates formed the North Saint Paul Land Company to pursue a vision of the city as a manufacturing center. They had considerable success in this promotion — 30 manufacturing companies were established there by 1890 — until the Panic of 1893 reset everyone’s expectations.

North Saint Paul is one of the oldest suburbs in the state. One factor that makes it attractive to current homebuyers is that much of its housing stock dates from the 19th century, not from late 20th suburban sprawl. The town boasts the oldest continuously operating saloon in Minnesota. Its Main Street (7th Avenue) is crammed with locally owned businesses and is a mecca for antique lovers. On Friday evenings in the summer, the History Cruzer Car Show draws large crowds to the town. 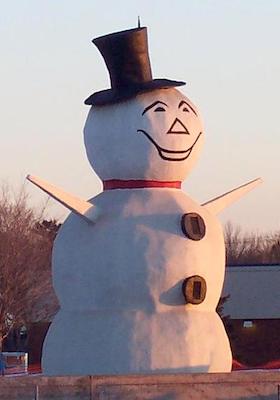 The North Saint Paul snowman, 44 feet and 20 tons of welcome to this venerable suburb, stands by the side of state highway 36.

Most Minnesotans, if they know North Saint Paul at all, associate it with The Snowman. This is a 44-foot, steel and stucco construction that stands beside state highway 36 at the Margaret Street exit. Townies have a love-hate relationship with the snowman. It’s their town’s icon, but it’s, well, kind of declassé, isn’t it?

Soon after the town’s founding, North Saint Paul mounted a Snow-Daze festival, and residents constructed a large snowman to celebrate it. The practice seems to have evolved into an annual happening; in the first half of the last century a large snowman had been created from the snow hauled away from plowing the streets. The current, 20-ton snowman was built in the early 1970s and was adopted as the town’s official icon and logo at that time. It was originally constructed in town and was moved to its current location beside the highway in 1990.