I never saw a white or a black squirrel back East. In the Massachusetts wilds I would hear, if not always see, fisher cats and coyotes; evidence abounded of deer, beaver, opossums, woodchucks, wild turkeys, and porcupines. (Once I chanced upon a pair of moose.) Nearer to inhabited places it was chipmunks, Eastern grey squirrels, and American red squirrels.

In St. Paul the wild creatures of which we see traces are limited to hawks and eagles. Word is that coyote and deer abide hereabouts but I have neither seen nor heard any evidence of them. In our residential neighborhoods we coexist with grey squirrels, but no red ones, and the occasional all-black or all-white squirrel. (Also: rabbits.) 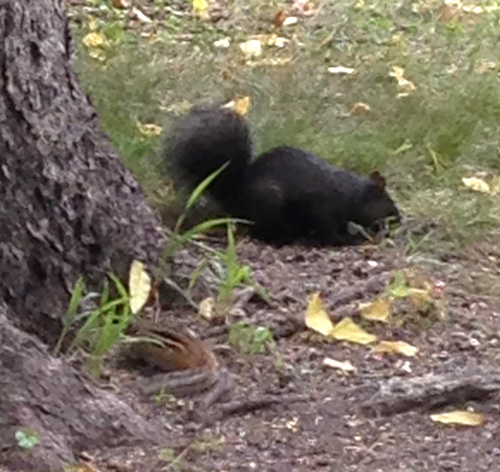 A black squirrel, with chipmunk photobomber, photographed at Fairview and Lincoln in Mac-Groveland

The black and white squirrel var­iants, it turns out, are pro­ducts neither of different spe­cies nor of albinism. Both are sub­groups of the Eastern grey squir­rel. (Albino white squirrels do exist, dis­ting­uishable by their red eyes, but they are rarer than the white morphs.) The normal range of the Eastern grey squirrel (and its morphs) covers pretty much the eastern half of the US, to the west of the Mississippi, extending up into Canada.

The black squirrel, a so-called melanistic variant of its grey brethren, has its admirers. Several cities and towns in the US and Canada pride themselves on their black squirrel populations, and a few offer annual festivals celebrating them. These include London, Ontario; Kent State University, OH; and Marysville, KS. Victoria Park in London, Ontario touts a pretty terrible song honoring the rare and elegant creatures. 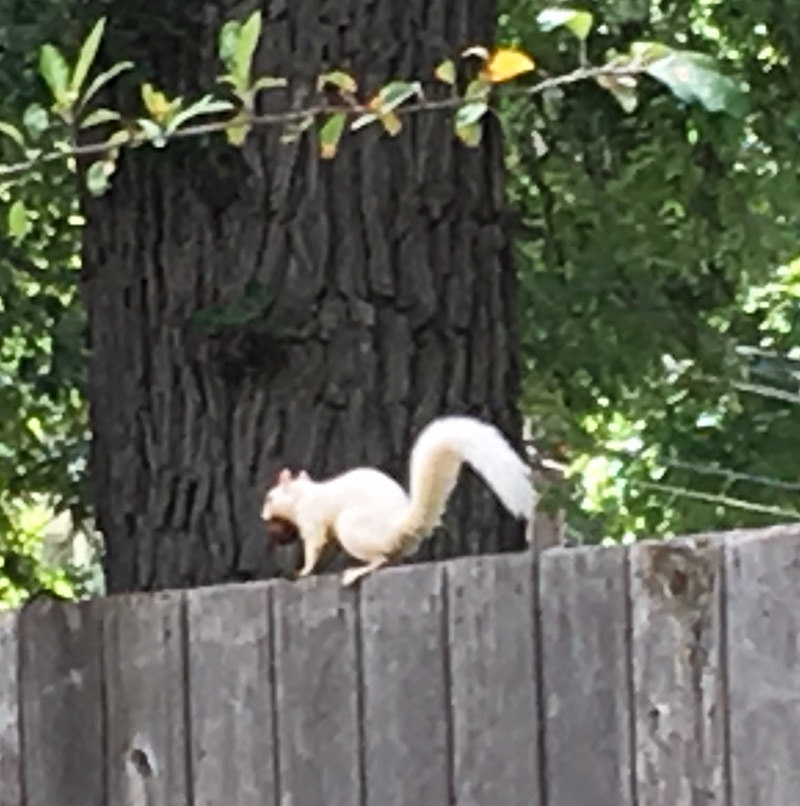 A white squirrel photographed at Howell and Lincoln

This page tells the story of Hobbs, NM, which tried importing a pair of black squirrels from Marysville in 1973. The town fathers were hoping to establish a black squirrel population that the town could use, presumably, to lure more tourists. The hapless pair of animals was turned loose in a park amid much fanfare, and were “promptly killed by red fox squirrels that Hobbs had imported earlier from Sadler, TX.”

White squirrels, a.k.a. white morphs, inspire as much admir­ation and adulation as the black ones, if not more. At least five towns claim to be the home of the white squirrel: Olney, IL; Marion­ville, MO; Kenton, TN (which has albinos, not white morphs); Bre­vard, NC; and Exeter, ON (which has both white and black morphs). The war of words about who was first and who has the most can get quite heated.

Untamed Science did a video exploration of the white squirrel phenomenon. The home page of this investigation has a map of sightings across the coun­try, to which I just contributed by filling out their survey form. 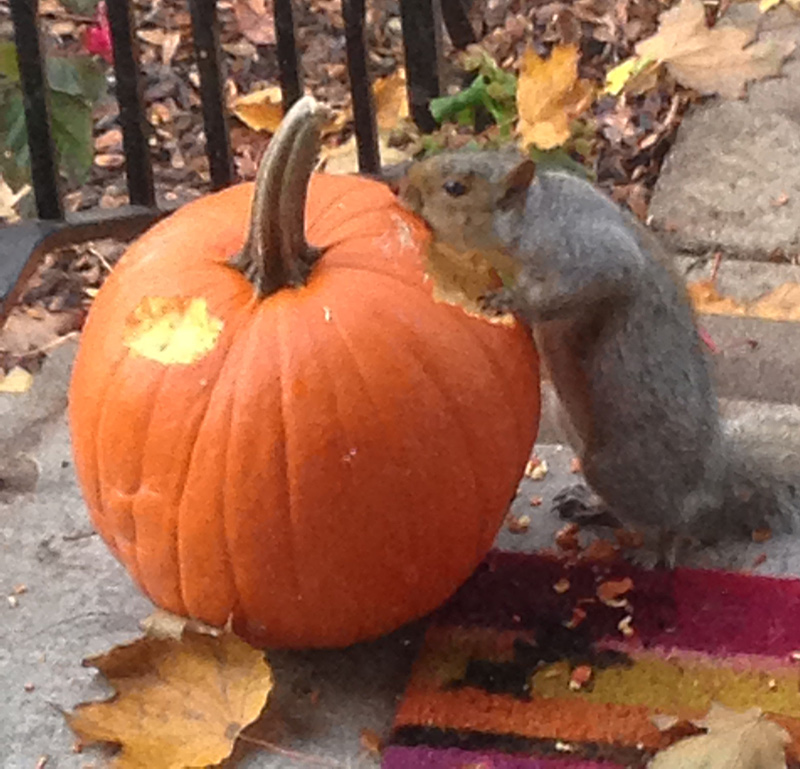 Our own scurry of grey squirrels acts bolder and more determined than the ones I knew in Massachusetts. Here is a photo of one of the local gang going at our Halloween pumpkin on the front steps. They have also chewed a substantial hole in the 1/8” PVC lid of our gar­bage con­tainer out by the gar­age, so they can visit there and feast at will. Fortunately that squirrel restau­rant is “eat-in” only; the hole is too small to allow them to drag a garbage bag out, as I am sure they would dearly love to do. I recently noticed another neighbor on the alley whose garbage container has been breached.