In 1997 Stone Brewing Company produced Arrogant Bastard Ale, an improbably influ­en­tial, nay iconic, brew: though not itself an IPA, Arrogant Bastard helped develop and cement the American taste for hoppy beers. It has maintained a 99 rating on RateBeer over the ensuing 19 years.

Last year Stone spun out the Arrogant brand into a separate entity, Arrogant Brewing, which has taken it on the road. For over a year the itinerant brewmasters have visited the finest breweries worldwide, shared the Arrogant Bastard formula under non-disclosure agreements, and produced strictly limited runs of the brew for local on-tap sale only, with proceeds going to charity.

The Arrogant ones have descended upon 18 breweries to date in Maine, Ohio, Colorado, Ireland, Hawaii, Australia, Texas — and Shakopee, MN.

This is happening now. Tipped off by CityPages, we showed up at Badger Hill Brewing Co., Shakopee, on Thursday afternoon and found a large and lively crowd enjoying beer and conviviality.

The barman pulled me a pint of Arrogant Bastard American Strong Ale and it was eye-opening. Dark like Guinness but not as thick or sweet. Strong (7.2% ABV) and hoppy as all get-out — 100 IBU — but totally balanced by sweet malt. Reviewers on RateBeer found flavors of caramel, toffee, cookies, grapefruit, pines, and who knows what-all. My beer palate is not that refined. I liked it a lot, and note that my go-to brew is a light IPA. 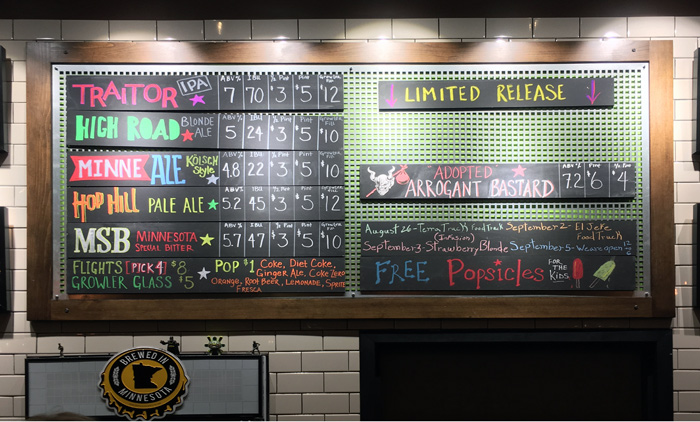 If you have any interest in the unfolding story of micro-brewed beer in the US, get yourself over to Badger Hill stat (4571 Valley Industrial Blvd South, Shakopee) and sample the Arrogant Bastard. Best estimate is that you have three more days.

Badger Hill brewed 16 kegs of Arrogant Bastard. They began tapping it last Tuesday, Aug. 23, and during our visit today the barman said they had gone through 7 of those kegs in the intervening two days. I expect the supply won’t last the weekend.

You can sample Arrogant Bastard on tap at the Happy Gnome on Selby, at Sea Salt at Minnehaha, and a few other places around the Cities. (Explore availability here.) But for locally and expertly brewed Arrogant Bastard you have one choice — Badger Hill Brewing — and about 72 hours.