Twin Citians consider it’s normal to shed shoes / boots / mukluks just inside anybody’s front door and to go around the house in bare feet, stocking feet, or slippers, in every month of the year.

Oddly enough, I didn’t encounter the shoeless preference at all back East, even in snowy locales such as Boston, Pittsburgh, or Buffalo. 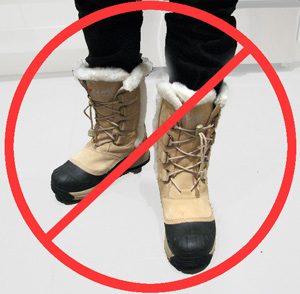 I first became acquainted with the custom at my in-laws’ house a mile from here, when we would visit the Cities from back East. I didn’t know how widespread it was until we began touring real estate out here earlier this year. Our realtor would wordlessly model the local expectation by removing her shoes just inside each house we visited, except for the ones that were construction zones.

Easy for her to do: she was wearing slip-ons. In running shoes it’s not an ideal way to look through a house. I found it necessary to re-gird to tour basements, attics, and yards and garages. These tours weren’t always proffered in serial order.

One well-traveled American expat ran headlong into the shoeless custom in Sweden. She believes shoelessness to be the majority preference in most non-English-speaking European countries and many in the Far East. Anglophones and much of the New World wear shoes indoors, except in the snow belt.

Etiquette blogs (examples here and here) offer tips for both hosts and guests to make their preferences known in ways that are minimally impolite. The key is for no guest to be surprised when asked to descalzar, and for no host to be faced with a reflexive refusal to do so from a blindsided guest.

In Europe it is not uncommon, apparently, for the host to provide slippers in a variety of sizes laid out in the entryway. Ones from Ikea are favored in Scandanavian climes.

We just had 11 people over for Thanksgiving; they ranged in age from 28 to 92. Of those guests, five removed their footwear at the door without being asked. Four remained shoeless, apparently happily, for the afternoon; one had brought along indoor shoes.

As it turned out, my Minnesota-raised fashionista wife didn’t even notice guests removing their shoes. She is in the habit of carrying heels when we go calling in wintertime.

Do you ask guests to remove their footware at the door?

This poll is no longer accepting votes

This poll is no longer accepting votes