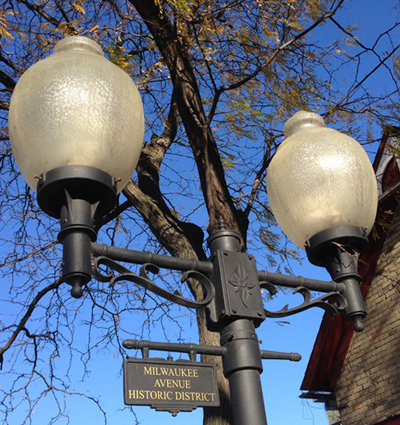 Here’s a story of the origins of the urban preservation and revitalization movement.

In yesterday’s below-freezing temperatures and brisk wind we walked the two blocks, 1400 feet, of the urban park that is Milwaukee Avenue in Minneapolis.

Our subject neighborhood began life as an alley (1880), became 22 ½ Avenue (1883), petitioned for re­des­ignation as Woodland Avenue but for reasons unknown was re­christened Milwaukee Avenue (1906), de­clined due to neglect (1930s-1950s), was colonized by hippies (1960s-1970s), faced razing and re­develop­ment (1970), inspired one of the first activist collectives bent on urban preservation (1970s), was added to the National Register of Historic Places (1974), was comprehensively revitalized and closed off to traffic (1970s-1980s), and is today one of the most satisfying walking neighborhoods in the Twin Cities.

Despite its appearance as a tourist attraction, people live on Milwaukee Avenue. By one reckoning the value of their homes is 31% higher than that of larger houses on a comparable neighboring street. Some of that added value comes from the appeal of the pedestrian-only street, and some is down to its historical designation at local, state, and federal levels.

One of the residents is Bob Roscoe, who was at the center of the 1970s movement to save this neighborhood from the wrecking ball. His 2014 book, Milwaukee Avenue: Community Renewal in Minneapolis, documents the birth of the urban preservation and renewal movement from the inside. 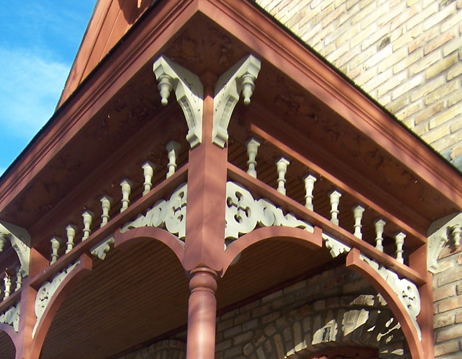 Milwaukee Avenue was born in the greed of 19th-century real estate agent William Ragan, who had a gambling problem, according to Roscoe’s book and this interview he conducted last year with Streets.mn.

Ragan needed to extract the maximum profit from the alley he purchased between 22nd and 23rd Avenues, just off Franklin, in what is now the Seward neighborhood of Minneapolis. He hit upon the idea of building what we would now call medium-density urban housing on quarter-sized lots. To save money Ragan used the same blueprint for all the houses. He faced them with brick, an unusual move for the time in low-end dwellings, and added identical gingerbread to the porches and peaks of all the houses.

With no front yards, 15-foot lot clearance on one side only, identically pitched roofs, and mostly brick construction, the properties look almost like row houses. In his book, Roscoe succinctly describes the architectural facets that give the street its variability within uniformity and its uncommon sense of balance. He notes that the rooflines of all the houses on the east side of Milwaukee Avenue were built to the same elevation, even as the ground drops 3 feet on its 2-block run north to south. A certain intimacy is conveyed by the narrow (25′) former one-way street that is now a pedestrian mall with central plantings.

The first occupants of 22 ½ Avenue were Northern and East European workingmen and their families. By the time the city decided to raze the lot of them in the 1970s, some of the houses had been occupied by the same families for well over half a century.

But some housed artists, roots bluegrass musicians, hippies, and veteran activists protesting the Vietnam war. When these energetic young people learned of the city’s plan to level their neighborhood, and 35 blocks all around them, they decided to “stick it to the man” in City Hall. The city took no heed of the noise raised by the organization they had formed, the Seward West Project Area Committee, so the activists went over their heads by quietly applying to the National Register of Historic Places, and in 1974 the Milwaukee Avenue Historic Dstrict was born.