The Twin Cities love a parade.

For a few more days we will have Pianos on Parade around the metro area. Most of the pianos aren’t in fact moving around, as “parade” might suggest: Pianos on Parade is a public art project intended to involve the public in music and education. Imaginatively decorated pianos are scattered across the Cities and anyone is invited to stop by and play them.

Credit where due: Hat tip to neighbor Majlis Jalkio for mentioning Pianos on Parade; and em­barrassed thanks to neighbor Mark Gilbert for correcting my spell­ing of “Schulz.”

This year’s event runs from June through August — Pianos on Parade was put on also in 2013 and in 2011. A video at the latter link shows a variety of people plonking or rocking out on the public instruments.

The project is run by Keys 4/4 Kids, a homegrown organization that picks up donated pianos, refurbishes them, and sells them to fund educational programs. The group is also sponsoring Pianos on Parade events this year in Chicago and in Kansas City, MO. 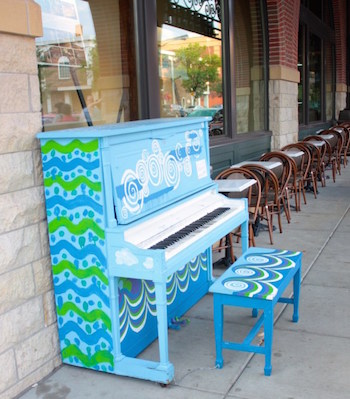 Pianos on Parade deliberately invokes an echo of a much larger and more ambitious program — Peanuts on Parade — that ran for five years early in the century to honor Charles M. “Sparky” Schulz, creator of Peanuts. Schulz was born in Minneapolis and raised in St. Paul.

I have managed to find a few hints as to where the cartoonist lived in this city, but not a detailed chronology. Schulz, an only child, was born in 1922 and died in 2000. One travel blogger says that the Schulz family moved to St. Paul when Charles was 4 years old, and lived at 1680 James Avenue and later at 473 Macalester Street. PBS’s American Masters says the family lived for a time in a walk-up above what is now O’Gara’s Bar and Grill at Selby and Snelling. Schulz’s father was a barber (as was Charlie Brown’s) and worked a short distance away on Selby. They had moved there for easy access to a druggist able to supply morphine when Schulz’s mother was dying of cervical cancer in 1942.

Earlier, during the depression, the family had rented a house a few blocks away on Dayton Avenue. Schulz attended Richards Gordon Elementary School (1619 Dayton) and Central Senior High (Marshall at Lexington Parkway); he rode the Selby streetcar to get there, according to the Peanuts FAQ. (An aside: Central Senior High has produced more Rhodes Scholars than any other high school in the US.) Schulz moved out of the state with his first wife in 1958, ending up in Sebastopol, California.

The photo below illustrates the spirit of the Peanuts on Parade tributes. It is from Google Street View and depicts the Grand Avenue Veterinary Center fronted by a 5-foot statue of Snoopy lying on his doghouse, accompanied by the bird Woodstock. The doghouse has a built-in IV pole complete with drip, and Snoopy’s ear (the one you can’t see from here) is bandaged up. This gel-coated fiberglass statue on a concrete base was commissioned by GAVC and designed by Steve Gamache in 2004. 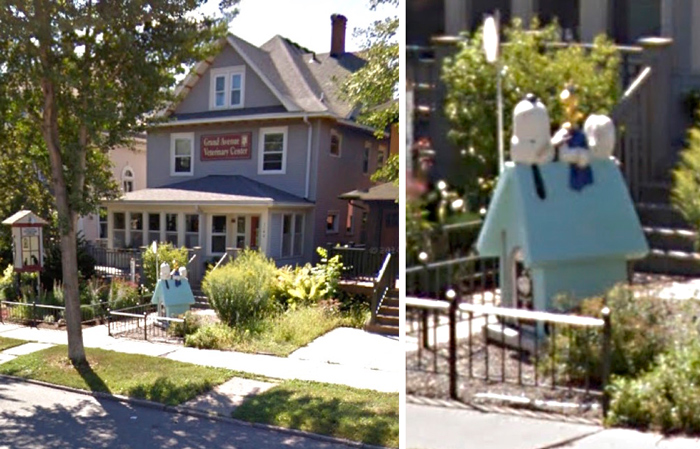 Another Mac-Groveland statue still in place is the Lucy standing outside Artscraps, on Pascal Street just east of St. Clair Avenue.

At least 33 “Doghouse Days of Summer” statues remain from the 104 that went up around the Cities in 2004. (The link takes you into the web space of John A. Weeks III, a Twin Cities photographer, blogger, and polymath.) At the end of that summer most of them were auctioned off for charity. The 2004 event was the final one of five such summers comprising Peanuts on Parade. The earlier series were titled Snoopy (2000, 111 statues), Charlie Brown About Town (2001, 103), Looking For Lucy (2002, 109), and Linus Blankets Saint Paul (2003, 91 statues).

Charles Schulz had his studio for 40 years in Santa Rosa, California, and a museum and research center dedicated to his work is located there today. That city must have thought the Minnesota Peanuts on Parade was a good idea. They picked up in 2005 where we had left off, commissioning dozens of statues each for It’s Your Town, Charlie Brown (2005), Summer of Woodstock (2006), Joe Cool’s Summer (2007), and Look Out, It’s Lucy! (2010).

By the way, the whole artist-decorated-fiberglass-statues-in-public-places-auctioned-for-charity idea began with an exhibition of cows in Zurich, Switzerland in 1998. (This site claims that the idea originated in the same city in 1986, with an exhibition of lions.) A traveler brought the cow meme back to Chicago and in 1999 CowParade was inaugurated. CowParade was picked up by other cities, a total of 79 to date, and has become the largest and most successful public art project in history, raising over $30 million for charity. The Public Art in Chicago site linked above invokes this litany of follow-on projects around the US:

That list doesn’t mention Cod in Boston, but I could swear I did witness such a cavalcade along Newbury Street and elsewhere in, probably, 2000.