↓
Home→Books→Library
[Note added 2018-10-19] Todd Bol, the founder of the Little Free Library movement, died this week of pancreatic cancer at his home in Wisconsin. He was 62. Here is the Star Trib’s obituary.

Minnesotans love their books, and the Little Free Library phenomenon is one proof of it.

Picture a hand-crafted, glass-fronted, miniature house on a post in your front yard. It’s filled with books. A sign invites visitors to take one for free or to leave one. 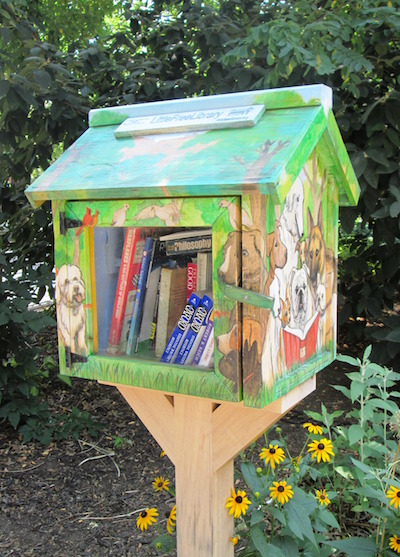 The movement started in 2009 in Hudson, Wisconsin. Little Free Library is now a 501-C(3) non-profit corporation based there. Matt Bol birthed the idea when he put up the first LFL outside his home to honor his deceased mother, who had been a teacher and a lifelong lover of books.

Bol and co-founder Rick Brooks started hand-building LFLs and giving them away. As a movement began to gather around them, it became apparent that that approach would not scale, so they formed a tax-exempt charitable organization and began charging for LFL kits and pre-built Libraries. The product catalog now offers 21 different designs going for $150 to $600, without posts or mounting hardware.

Two one-of-a-kind designs are listed for $1,500 and $1,000,000. The former is covered in stained glass; the latter has drawings by Simpsons creator Matt Groening and comes hand-delivered by Matt Bol, who will take you out to dinner into the bargain.

Andrew Carnegie built 2,509 libraries between 1883 and 1929. The original goal of the LFL founders was to put up more LFLs than that. Once the movement got rolling the founders guessed they would achieve that number by 2014, but the milestone was passed in 2012. The organization reports that as of last month more than 30,000 libraries had been registered in 50 states and 70 countries.

LFL has similarities to the open source movement in technology — it encourages others to spread the meme widely, for the enhancement of both literacy and community. For this reason the official count of LFLs underestimates the phenomenon’s scope. For example, this Seattle-area craftsman, a retired home remodeler, makes his living designing and building “mini libraries.” His designs range from $250 to $800. His website doesn’t mention the LFL movement or organization.

You may have read about the Little Free Library sensation before. At this point press outlets are picking up the story 10 or 20 times every week. A local journalist published a book on the topic.

Massachusetts is home to a total of 82 LFLs, according to this official list from July. (Note: that link will download a 7.2-MB PDF.) In the area local to Groton, MA, three are listed in Westford and one each in Chelmsford, Lowell, and Leominster.

Minnesota, with a population about 20% smaller than that of Massachusetts, has ten times the number of LFLs: 821 in all. St. Paul hosts 121 of those, or about one in seven, far outstripping the city’s proportion of the state population, which is one in twenty.

Of the Little Free Libraries in St. Paul, 21 are located in four super-blocks (pictured) in the Macalester-Groveland neighborhood, a rough square 1.2 miles on a side. I’m sure the density of universities in the area has everything to do with Mac-Groveland’s fondness for the LFL. That, and the walkability of this neighborhood.