What culinary gifts have the Twin Cities bestowed on the rest of the country?

The Juicy Lucy hamburger might make the (short) list — except that it is hardly to be found outside this metropolian area.

What it is: two hamburger patties pressed together at the edges surrounding cheese. In the original versions, it was American cheese. The first bite is dangerous, accompanied as it is by molten cheese and steam. 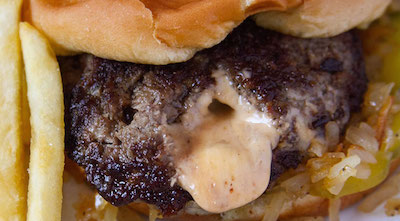 The Juicy Lucy was invented in a Minneapolis bar (or club) in the 1950s. It was either Matt’s Bar at E. 35th and Cedar, or the 5-8 Club 23 blocks to the south. Matt’s Bar calls theirs the Jucy Lucy and the 5-8 Club, a former speakeasy opened in 1928, spells it correctly.

In the 5-8 Club the staff has been known to wear shirts declaiming: “If it’s spelled right, it’s done right.” Meanwhile, advertising for Matt’s Bar warns: “Remember, if it is spelled correctly, you are eating a shameless rip-off!” (The motto of Matt’s Bar is “Fear the Cheese!”)

In journalistic rundowns of the best food in the area (for example here and here), Matt’s and the 5-8 trade off for top honors for the best Ju{i}cy Lucy.

Neither establishment objects when others adopt and adapt the Juicy Lucy — one surmises that they are too busy sniping at each other to notice, let alone to object. Currently there are in excess of a dozen restaurants in Minneapolis and St. Paul at which you can score a variant on the Juicy Lucy theme.

In our neighborhood the Groveland Tap serves seven varieties of Juicy Lucy, including the Poutine Lucy with cheese curds and gravy. The Blue Door Pub offrs up the Bluecy, stuffed with blue cheese and garlic, and ten other variaions on the classic. The Nook features five riffs on the Juicy Lucy. Propriety mitigates against mentioning here the name under which they are purveyed.

I had my first Ju{i}cy Lucy at Matt’s Bar some years back. I have sampled the 5-8’s offering and, in recent weeks, those of several of the above-enumerated St. Paul establishments. My pick so far: Matt’s Bar, hands-down.

P.S. — The only restaurant I know of outside this metropolitan area serving a Juicy Lucy is Whitman’s in New York. If you know of another, please leave a comment here or on Facebook.

P.P.S. — The Twin Cities do the most awesome french fries.

[Update 2015-08-03] We stopped into The Nook last evening for dinner and each ordered one of their Juicy Lucy-style burgers — I am still not going to print the name they have bestowed on their variant, you can look it up. Ranking the five Juicy Lucy interpretations we have tried, Katharyn and I agreed that The Nook’s falls dead last. The meat isn’t in the same league as that served at Matt’s Bar. The cheese is cheddar and American, but to my taste the American dominates, and not in a good way. The bun is unobjectionable, not as good as either the 5-8’s of Groveland Tap’s. The Nook’s fried onions are a nice touch, however.

[Update 2015-08-11] We visited the Nook again and had a bleu cheeseburger with sautéed mushrooms, not a Lucy-style burger. It was fantastic. I’m revising upward my estimation of the somewhat over-hyped Nook. A factor is the tee shirts some of the staff wear: “Meat is murder. Tasty… Tasty… Murder.”