The Twin Cities are slowly being Californicated.

I’m taking liberties with the term, which most know as either a 21st-century TV series starring David Duchovny or a sort of global cultural imperialism originating in Hollywood.

I’m using “Californication” to refer to a particular urban blight: tearing down a small 1920s or 1930s house on a harmonious block and erecting an oversized, overbearing, modern monstrosity that blocks out the sky for its unfortunate neighbors and turns its back on the kind of urban living that the other residents of the block moved there to enjoy. 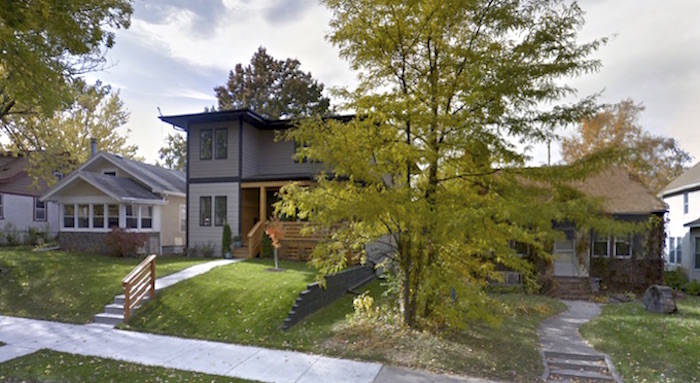 Our block is so far unbroken. Californication is just beginning in St. Paul; it is far more advanced in parts of Minneapolis. Katharyn has voiced the opinion that in general Minneapolis is more willing to tear down the old to make room for the new; St. Paul on the whole has more appreciation for relics of bygone eras and is not so quick to obliterate them.

Before settling on this neighborhood we looked at a number of others around the Cities, especially the Fulton area around 50th and France in Edina / Minneapolis. The photo above and the two following are Google Street View images captured from that area in October 2014. The photo above shows a Californication looming above its neighbors on a street of modest one-story homes. In the next photo, the new construction literally puts its neighbor to the north in the shade. The third shows an obnoxious (IMO) oversized house dwarfing its indigenous 2-story neighbors. 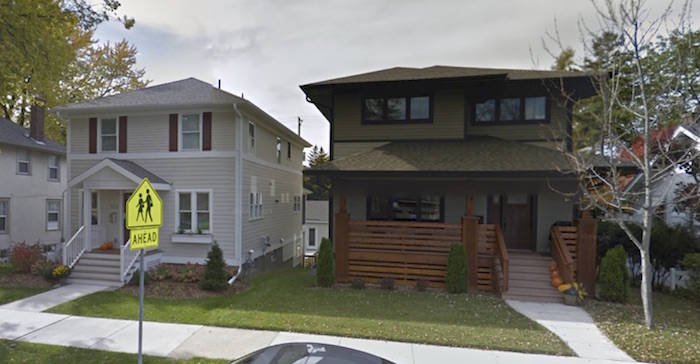 There are two common vectors for teardown / Califormications: owners and speculators. In the first case, an individual or family may buy on older house, knock it down, and construct the much larger house they desire. In the second case, the teardown and reconstruction happen strictly on spec and strictly for the profit of a quick sale. The result in either case is, as often as not, a less desirable block but one with higher property taxes.

The Street View image below is a capture from our neighborhood in St. Paul; the Googlemobile visited in August 2014. The teardown had been accomplished and a massive new foundation poured. The final image shows the current state of construction on this unseemly (IMO) addition to the neighborhood: a 4,500 sq. ft. residence among modest houses less than half the size. 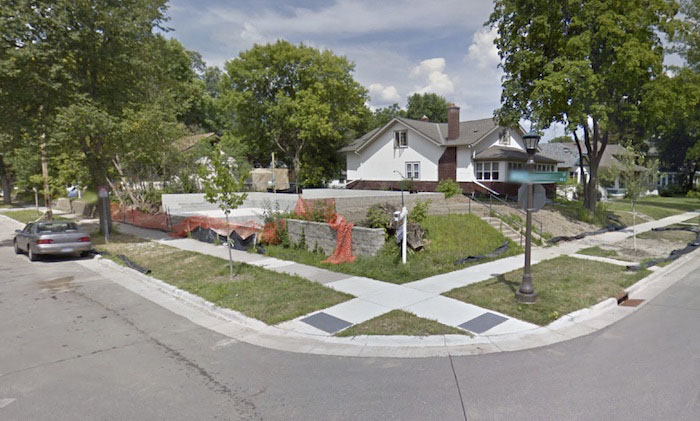 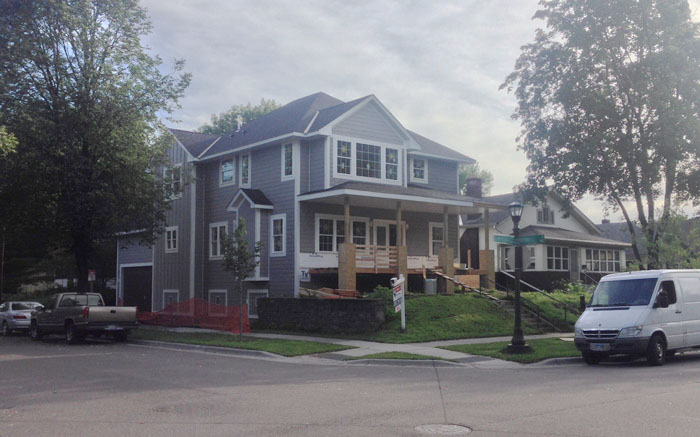 There are certainly many suburban neighborhoods where houses at such a scale would blend in harmoniously. Traditional urban blocks of quarter-acre properties in Minneapolis and St. Paul do not number among them.

Here is the Facebook page of an outfit called Save Our Saint Paul Neighborhoods. We plan to get involved with them once our moving-in frenzy subsides.